#Review - Eyes of the Forest by April Henry #YA #Thriller #Suspense 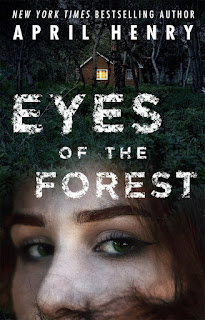 After a bestselling fantasy author disappears, only his biggest fan believes he’s in danger and has the courage to uncover the truth in this fast-paced mystery with a chilling psychological twist. Bridget is RM Haldon's biggest fan. His epic fantasy series, Swords and Shadows, created a lifeline between Bridget and her mom as she lost her battle with cancer. When Bridget met Haldon at his only book signing, she impressed the author with her encyclopedic knowledge of the fantasy world he'd created. Bridget has been working for him ever since as he attempts to write his final book. Now, Haldon is missing, and Bridget is the only person who seems concerned. Can Bridget piece together Haldon’s clues and save him before it’s too late?

April Henry's Eyes of the Forest is a mashup of Misery, and Games of Thrones. 17-year-old Bridget Shepherd is author R.M. Haldon's Swords and Shadows series biggest fan. She was hired when she was 12-years-old to work with the author to make sure he was keeping his storylines straight and not taking unnecessary side trips. Bridget is literally a walking, talking, encyclopedia of the authors King of Swords series. She created a database of his books and the characters, landscapes, realms, creatures, everything that can be cross-referenced as he works his way towards completing the series.

It has been several years since R.M. Haldon released a new book due to writer's block which has made his fans unhappy, his publisher is unhappy, while his books have turned into a TV series. If you are a writer, some of you may or may not understand the feeling of writer's block. So, he comes up with the strangest idea of getting himself kidnapped, and locking himself away from the normality that he's used to so that he can figure things out. In many ways, Haldon is a reclusive hermit who has grown lazy.

He works with a High School student to make it look as though he's been kidnapped and locked away in a cabin in the middle of the woods. He is given a chamber pot, he's given an out of date typewriter, and a treadmill which he is locked to. When yet another character gets involved, Haldon decides to play chicken by writing two different stories and keeping one to himself. But things don't go as smoothly as he thought, and ends up hoping that Bridget will figure out that he's in trouble and sends help before things get out of control.

Like every other book this author has written, the chapters are short, the pacing is on point, and the characters often find themselves up against some twisted secondary characters like Derrick Dart who is obsessed with LARPing. There's another character who I shall refer to as the over the top villain whose shenanigans wore me out. Then you have Ajay Kapoon who is the best cook in his large Indian-American family who finds friendship with Bridget who reads to him all of Haldon's books. Don't believe me? Read the book and all of the dishes he makes for Bridget and his family. If you are not hungry by the time the book is done, I don't know what else to tell you.

Disclaimer: I received a free digital review copy of this book through NetGalley. All opinions in this review are my own and are honest and unbiased.