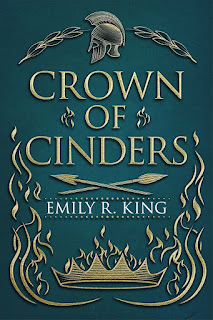 Going to battle against a Titan in the war of all wars, one woman is making history in an epic novel of ancient Greece by Emily R. King, author of the Hundredth Queen series.

May Gaea be with you…

Althea Lambros is growing into her power, wrestling with a burdensome heritage, and unwilling to concede to Cronus, the redoubtable God of Gods. For that, Cronus is making good on his promise. Calling upon the elder Titans, he’s bringing down his wrath on the world. Suffering quakes, tempests, fire, and hail, mortals are paying in blood for the war of the gods.

With the help of her friend Theo, Althea takes cover with her sisters, Bronte and Cleora. But they can’t hide forever. To mastermind the downfall of the evil king, Althea must recruit allies of her own before the aggrieved mortals surrender the sisters to Cronus in exchange for peace.

Is Althea formidable enough to win? It’ll take the help of her sisters and those willing to fight for the cause of the just. As the gods pick sides, Althea must divide heaven and earth to defeat the enemy and write the true history of the war to end all wars.

Crown of Cinders, by author Emily R. King, is the second book in the Wings of Fury series. It has been 6 months since Althea (Hera) learned that she, and her sisters Bronte (Demeter), and Cleora (Hestia) are daughters of Cronus and Rhea. Now, Cronus is whipping up the old guard in order to suppress the new Gods and Goddesses while focusing on Hera who worked with Zeus to send Cronus packing and into hiding. With a bit of help from Selene and others, Hera searches for her other brothers (Poseidon and Hades) hoping they will stand with her, Zeus, and her sisters against Cronus.

Hera and her lover Theo, formerly an officer with the First House's Army, and Half Titan himself, must deal with a plethora of hurdles including traveling to the Underworld to find another lost brother known better as Hades. Thanks to General Atlas, the new head of Cronus's army, there's a large bounty on their heads and every sell sword and mercenary is eager to collect. If Hera and her group are captured, the likelihood of them being sent to Tartarus is very good.

Especially since Cronus loves sending his enemies, including Uranus, there for eternity. The first generation Titans (Pallas, Perses, Menoetius, Lelantos) have mostly aligned with Cronus, but there are a few exceptions. Hera, Theo, and Poseidon's adventure to the Underworld is well done. The author includes some of the biggest monsters of mythology who are more than they seem.  One of the biggest storylines of this series was the alleged prophecy that claims that Zeus is fated to defeat Cronus in battle.

Books are supposed to evoke emotions. Welp, my emotions are telling me that I hate the very fabric of Zeus's existence for what he does and attempts to do in this book, especially towards Hera who is twice the warrior that Zeus is. No matter how many mythology books you read about Hera, or Zeus, etc, it pains me to believe these two ended up together or that Hera is thought to be evil. Zeus has been portrayed as hero yet the author makes it known that mythology is always who controls the narrative.

Often times the losers are forgotten about. Zeus and his "relationships" wasn't sugar coated by the author which I respected. He was a total weasel and there's no sugar coating his sexual deviancy.  It's also curious that Hera became the Goddess of Marriage, Motherhood, and Familial Love after all of Zeus's shenanigans. Watching Hera come into both her name and her abilities, and her relationship with Theo was done well.

I think one of the worst things historians have done over the centuries is to belittle the hard working women who stood on their own merits and didn't need men to help guide them. This includes Hera. She loves Theo, but there's so much else at stake to actually hope for a future together. I will keep an eye out for the next works by this author who, it seems, I seem to read everything she writes.