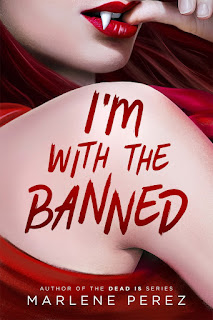 The bestselling author of the Dead Is series is back with another snarky, hilarious vampire romance tale just in time for the vampire genre’s resurgence!

Tansy’s just trying to stay alive, stay ahead of her enemies, and stay with her boyfriend, Vaughn. They’re hoping to make the whole vampire queen/vampire hunter thing work, but dating while deadly is harder than she thought, especially now that the Drainers are back. They may have changed their name and their brand of music (country western? Really?) but they’re still a vampire band, no matter what they’re wearing.

Add to that, Tansy’s long-lost mom—affectionately known within the vamp community as The Executioner—is now engaged to Vaughn’s dad, unless she and Vaughn can figure out a way to stop the wedding. Add a handful of cute designer dogs (actually hellhounds), a fight for Tansy’s crown, and the biggest jaw-dropping reveal of all, and it’s just another day in the life of everyone’s favorite rogue vampire queen.

I'm with the Banned, by author Marlene Perez, is the second installment in the authors Afterlife series. 17-year-old Tansy Mariotti has literally had her life turned upside down and sideways after saving her best friend Skylar Avrett, and killing the former Vampire King, thus becoming the Queen of the Vampires in California. The thing that makes Tansy different is that she was raised by her grandmother after her mother abandoned her. She's now considered to be a Strija Vie, which means she's a vampire/witch hybrid.

Even though Tansy is Queen of the Vampires, she still can't get out of going to High School, or being protected by Rose and Thorn who work for (PAC) Paranormal Activities Committee. Tansy misses the sunshine. She has to literally use a parasol to protect her from the intense light while also drinking a mixture concocted by her Grandmother from actually drinking live blood from a human being. On top of trying to sort through the former Kings holdings, and keeping vampires like the former Drainers, who are now country music singers, in line, she's also missing Vaughn Sheridan who has been gone for months training to be a hunter.

When he returns, things really get twisted. Something happened to Vaughn while he was training in Texas and he doesn't want to tell Tansy. Tansy will soon learn the truth after werewolves turn up dead with their hearts missing and she meets a pack of werewolves including Skylar's ex Connor who believe vampires are responsible. Oh, and to make matters even more intriguing, Tansy's mother Vanessa, you know the person who abandoned her when she was born, and ran off to become known as the Executioner under the former Vampire King? Well, she's back in town, and so are a group of Hellcats who seem particularly interested in Tansy.

This is supposed to be a tongue and cheek attempt at poking fun at the Twilight claim to fame by having vampires and werewolves who don't exactly like each other with a bit of romance thrown in to make things interesting. The book has secrets, return of an enemy, weird relations, trust issues, betrayal and also explores new facts about the Supernatural World. There are literally too many surprises to mention without spoiling them so, let's not. I will say this; this book ends on a cliffhanger which you will have to wait until July 2022 (A Sucker for You) to find out what happens next.