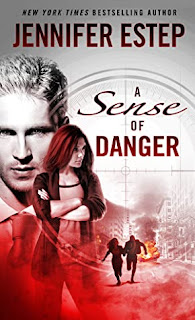 My name is Charlotte Locke, and I’m an analyst for Section 47, a secret government agency that tracks terrorists, criminals, and other paramortal bad guys who want to unleash their abilities on an unsuspecting mortal world. I have a magical form of synesthesia that senses danger and uncovers lies—making me a stealthy operative.

I’m trudging through another day when one of Section’s cleaners—assassins—takes an interest in me. I don’t need my synesthesia to realize that he is extremely dangerous and that he will do anything to achieve his goals—even if it means putting me in the line of fire.

I’m Desmond Percy, one of Section 47’s most lethal cleaners. I’m also a man on a mission, and I need Charlotte Locke’s skills to help me keep a promise, settle a score, and kill some extremely bad people.

Charlotte might not like me, but we’re stuck together until my mission is over. Still, the more time we spend together, the more I’m drawn to her. But at Section 47, you never know who you can trust—or who might want you dead.

A Sense of Danger is the first installment in author Jennifer Estep's Section 47 series. Things you should know. 1. This was previously released as audio only and now is being self published by the author. 2. The story alternatives between two main characters: Charlotte Locke is an analyst for Section 47. She has synesthesia magic which allows her to see errors in spreadsheets, reports, etc. Desmond Percy is one of the agency’s top cleaners; an assassin. His best friend and their entire team was killed on his last mission, and now he’s looking for revenge.
Section 47's main mission is to gather intelligence and then use that information to prevent terror attacks, mass casualty events, and other serious, life-threatening catastrophes. Section 47 goes after those who used magic and enhanced weapons to commit their crimes. Charlotte is a legacy. Her father Jack Locke was a cleaner and her grandmother was an analyst who taught Charlotte a few interesting twists in how to find information she really needs. While working with Section 47 is interesting, she's still not a charmer, or a cleaner, which legacies tend to gravitate towards; like her own father.
Charlotte has been up to her ears with investigating Henrika Hyde for 3 months, but she's been ignored time and time again when it comes to getting a new job. Then comes the arrival of Desmond who carries his own baggage and needs Charlotte to help him find the people responsible for killing his entire team, while leaving him as the only survivor. Trouble quickly comes for Charlotte when she encounters 4 assassins after working her job as a waitress. While her synesthesia warns her of pending danger, and allows her to tell who is telling the truth or not, she isn't like Desmond, a galvanist, who can use energy around him to thwart attacks.
Charlotte is soon pulled into Desmond's world, and finds that she's not out of the frying pan just yet. She's become a target for those trying to keep quite the number of treasonous co-workers working for Section 47 a secret. She's been taken in by the dangerous Desmond and his Aussie accent which ends up with her being assigned as liaison for an active mission to stop Henrika Hyde and Adrian Anatoly. Lucky for Desmond, Charlotte isn't a Mary Sue. She can actually use a gun, and she has a brain for which God gave her and she uses her talents quite lovely thank you very much!
This book has its fair share of twists and surprises, but...if you pay attention, I am sure you will see the villains/traitors coming from a mile away. No spoilers in this review, hopefully, but I will say that I am happy that the author finally got around to releasing this as an actual book, and not just audiobook. It also appears as though this isn't a standalone as originally thought, but part of a series and for that I am happy since the ending leaves room for plenty of more Charlotte and Desmond adventures. On a side note, if the author removed chapters 34-36 from the book, I would have like it a whole lot more. Hashtag #sorrynotsorry.
P.S. Since this book has already been out in the world, I found myself not worrying about posting my review before the actual release date in November.  Thank you to the author for releasing this in Kindle form, and providing a copy of this book for an honest review.