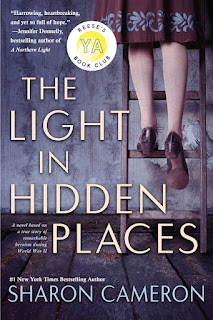 One knock at the door, and Stefania has a choice to make...

It is 1943, and for four years, sixteen-year-old Stefania has been working for the Diamant family in their grocery store in Przemysl, Poland, singing her way into their lives and hearts. She has even made a promise to one of their sons, Izio -- a betrothal they must keep secret since she is Catholic and the Diamants are Jewish.

But everything changes when the German army invades Przemysl. The Diamants are forced into the ghetto, and Stefania is alone in an occupied city, the only one left to care for Helena, her six-year-old sister. And then comes the knock at the door. Izio's brother Max has jumped from the train headed to a death camp. Stefania and Helena make the extraordinary decision to hide Max, and eventually twelve more Jews. Then they must wait, every day, for the next knock at the door, the one that will mean death. When the knock finally comes, it is two Nazi officers, requisitioning Stefania's house for the German army.

With two Nazis below, thirteen hidden Jews above, and a little sister by her side, Stefania has one more excruciating choice to make.

This remarkable tale of courage and humanity, based on a true story, is now a Reese's Book Club YA Pick!

Author Sharon Cameron's The Light in Hidden Places is the remarkable story about a true heroine named Stefania Podgórska. Stefania Podgórska (June 2, 1921 – September 29, 2018) and her sister Helena Podgórska (born 1935), came from a Catholic farming family near Przemyśl in southeastern Poland. During the Holocaust, Stefania and Helena harbored thirteen Jewish men, women and children in the attic of their home for two-and-a-half years. Both were later honored as the Righteous Among the Nations by Yad Vashem as well as by the Jewish and Polish organizations in North America, for their wartime heroism.
The story in this book takes place between 1936 and 1944. Stefania was one of nine children. She really had no voice. On a whim, when she was 13, she decided to leave home and stay with her older sister Marysia. Soon thereafter, she found a job working for Leah Diamant and her families grocery store in Przemysl, Poland, singing her way into their lives and hearts. She has even made a promise to one of their sons, Izio -- a betrothal they must keep secret since she is Catholic and the Diamants are Jewish. Stefania fell in love with the Diamant's, and couldn't understand the hatred that was thrown at them for being Jewish and believing in Moses rather than Jesus.
In 1939, the bombs fell on Poland, and the Germans invaded. Stefi's family scattered across Poland. Soon after the arrival of the Nazis, her mother and brother were taken to Salzburg for forced labor, while the Diamants were forced into a ghetto. The city she now calls home is divided by Russia and Germany and will remain that way until 1941 when Germans gain the upper hand and start on their mass murder spree of political adversaries, Romanovs, Ukrainians, and of course, Jews. On a trip back home, Stefania discovered that her younger sister Helene was left alone, and nobody was watching her or feeding her.
So, she decided that she would try to take care of her sister. The two Podgórski sisters lived in Przemyśl alone in an apartment rented by Stefania, who was 17 at the time, as well as a roommate who was in and out. Stefania and Helena make the extraordinary decision to hide Max, who had escaped a death train, and eventually twelve more Jews. Then they waited, every day, for the next knock at the door, the one that will mean death. When the knock finally comes, it is two Nazi officers, requisitioning Stefania's house for the German army.
For years they had to worry about getting caught. They even had an SS officer living next door! The rules were: Death to anyone who aids Jews; Death to anyone who harbors a Jew; Death to anyone who feeds a Jew; Death to anyone who provides transportation for a Jew; Death for anyone who takes money from a Jew; and Jews weren't allowed to keep their homes, or their businesses, or their bank accounts. Things got progressively worse in Poland with food shortages and people being taken from the Ghetto to trains and concentration camps where they would never been seen from again.
For 8 months, the Jewish fugitives begged the sisters to flee for their safety. They refused. After an intensive 8 months of worrying when the other shoe would drop, and wondering when she and her sister wold be deported to Germany with her mother and brother, Germany flees Poland the the 13 Jews find themselves scattering to the wind. Except Max who would later become Stefania's husband. Cameron apparently used Stefania's bibliography to fill in holes while also knowing that she couldn't write a 1,000 documentary. There was also a movie made about Stefania called Hidden in Silence.
It is fair to give Stefania a whole lot of accolades for what she did. But never, and I mean, never forget Helene who could have destroyed the entire setup up if she had told the wrong person. I am grateful that Sharon Cameron did so much work to gather all the information and put it in this book. It was utterly beautiful. I believe she did a good job with what she had to deal with and the fact that she took time to travel to Poland to walk in Stefania's shoes.