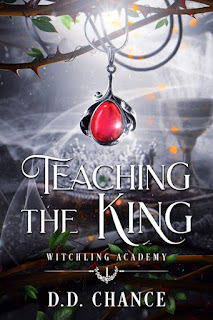 How do you break a promise to the King of the Fae?
Yeah. Good luck with that.

For centuries, Hogan witches were bound in a trumped-up contract to teach magic to the High King of the Fae. Then, a hundred years ago, we escaped that prison sentence and never looked back.

He's coming for me, and he won't take no for an answer.

But I don't care how much Mr. Tall, Dark, and Deadly makes my heart pound and head spin, a ridiculously unwanted side effect of that goddess-forsaken contract. I've dedicated my life to creating a safe haven for those in need—whether they’re rogue witches escaping their persecutors or monsters desperate for somewhere to hide. If I leave my tavern unprotected, every last soul I’ve helped will be hunted down, recaptured. Killed.

So I'll just have to find the contract that’s bound me to the most deviously sexy ruler across all the realms…and break it for good.

Before the High King of the Fae breaks me.

Teaching the King is the first installment in author D.D. Chance's Witchling Academy series. 25-year-old Belle Hogan first appeared in the authors finale of the Monster Academy series. Now, she gets her own series and her own problems and even more sexier and dangerous Fae who refuses to take no for an answer. Belle is the owner/operator of White Crane Tavern. She's a healer as well as a barkeep, and she keeps the lights on for those who most need safety and security.

For 100 years, the Hogan's have run the White Crane Tavern in the middle of the richest, most elite neighborhood in Boston where both Twyst Academy and Monster Hunter Academy are located. It's a safe place for Witches and monsters alike. Belle is the last of her line. Her grandmother is gone, and so is her mother, and she has no intention of swallowing her pride and returning to the coven of the White Mountains who would be shocked if they knew that the Hogans were right under their noses.

Whenever a new Fae king was crowned, a Hogan witch is supposed to travel to him and teach him witchling magic. 100 years ago, Belle's great-grandmother Reagan broke contract with the Fae and returned home leaving the Fae without a teacher and magic that is slowly fading. After years of avoiding her duties, Belle's time comes up when Aiden, the new King of Fae arrives at the Tavern and demands that she complete the Hogan agreement by teaching him magic. Refusal is not an option.

"The will come for you with shackles of steel and an emerald crown, and when they are fixed upon you, there is nothing you won't do for them."

For Aiden, he is in the middle of a war with dangerous wraiths and the worst thing could happen. His magic fails. Reagan Hogan supposedly gifted his grandfather with enough embedded magic into several precious artifacts to magically protect the High Fae for thousands of years. Thanks to his own fathers negligence, Aiden must travel to the human world and demand that whatever Hogan witch is alive, doesn't get to slip out of her commitment of teaching him and his people magic.

As I am the first reviewer out of the box, this is where I will end the summary of the book. I will say that this story alternates each chapter between Belle and Aiden. The situation between the two gets hot and heavy quickly, but don't let Belle fool you. She has a reason for agreeing to help Aiden. She knows her family needs to find a way to complete the contract so that she can be free, and so can any offspring she might have in the future. Especially since there has no seen benefits to her family helping the High Fae with magic.

My final statement is this, there is a guest appearance in this book of a character you will know if you've read the authors previous series Monster Hunter Academy. I will also say that the book has two distinct cliffhangers one for each Aiden, and for Belle. In this case, the cliffhangers are a good way for me to remember to watch our for the sequel since I must know what's going to happen next, and what other troubles are in store for the couple.