#Review - Any Sign of Life by Rae Carson #YA #SyFy 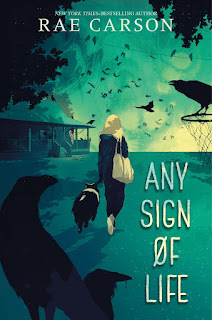 New York Times–bestselling author Rae Carson delivers a harrowing and pulse-pounding survival story set in the near-future Midwest—with a cosmic twist. When a teenage girl thinks she may be the only person left alive in her town—maybe in the whole world—she must rely on hope, trust, and her own resilience. A must-have for readers of Rick Yancey’s The 5th Wave and Neal Shusterman’s Dry.

Paige Miller is determined to take her basketball team to the state championship, maybe even beyond. But as March Madness heats up, Paige falls deathly ill. Days later, she wakes up attached to an IV and learns that the whole world has perished. Everyone she loves, and all of her dreams for the future—they’re gone.

But Paige is a warrior, so she pushes through her fear and her grief. And as she gets through each day—scrounging for food, for shelter, for safety—Paige encounters a few more young survivors. Together, they might stand a chance. But as they struggle to endure their new reality, they learn that the apocalypse did not happen by accident. And that there are worse things than being alone.

Rae Carson's Any Sign of Life is simply not anything special, nor should it be propped up as the next best thing in Young Adult Science Fiction, or Apocalyptic, or Dystopia. If you have read The 5th Wave by Rick Yancy or Neal Shusterman's Dry, or Station Eleven by Emily St. John Mandel, or any number of other books in this genre, then you can pretty much guess the storyline. Paige Miller is your typical female apocalypse protagonist. She's a well off teenager who was a really good basketball player who had plans and a scholarship to look forward to when she graduates with her best friend Shawntele.

Then one day after spending a week in a coma with what she believed was the flu, she wakes up with an IV in her arm and discovers that her entire world has been forever torn asunder by something she somehow managed to live through. Her entire family is dead and so is her best friend and everyone else that lives around her. After stumbling and bumbling and then deciding what she should do next, she manages to find Emmaline, her next door neighbors dog who has been left alone for who knows how long. Several days later, Paige runs into Trey Dawson who becomes her companion.

Trey works at a Pharmacy as well as being a professional prospect who had just recently moved to town. Slight spoilers, Trey was immune to the virus and is curious how Paige was able to survive when 99.9% of the population is no longer left standing. The next character readers meet is a girl named Tanq who is also immune. No, I am not going to tell you her real name since it doesn't matter one way or the other. Until you meet two other characters who seem to know more than they are saying, and knew that Trey, and Tanq had survived. For them, Paige is a shocking surprise since they know of nobody who was infected but didn't die.

Tanq's personality is being angry at everyone no matter how nice they are to her and being a street artist. It takes Paige and Trey too much time to convince her that she's better off with them, than alone. The three soon meet two other survivors in Manny and Wyatt who know pretty much everything about what happened and who is to blame for the Earth being nearly wiped out. There has never once in human history been a virus has completely wiped out humanity. Was the virus engineered in a lab? Who was stupid enough to release the virus?

For me, whenever an author puts her personal political views into a story, I immediately reduce the rating and will continue to do so. The author believes that it is perfectly okay to call out certain characters for being racists when they're not. The author believes that if a white girl likes a black guy, they are, well, racist and guilty of white supremacy. Her exact words are white women who fetishize about black guys is racism. Allegedly, her so called best friend told her this. It is also apparent that the author wanted to jump in feet first on the Covid bandwagon, as well as blaming white people for everything that has ever happened.

The book ends on a cliffhanger but I don't feel the need to continue to punish myself by having different opinions from this author.