#Review - The Keeper of Night by Kylie Lee Baker #YA #Fantasy 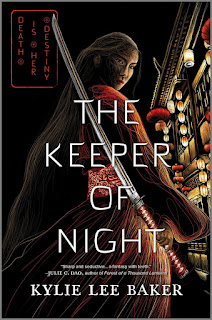 Julie Kagawa meets Scythe in this captivating and evocative journey into Death’s domain as one soul collector seeks her place in the underworld of 1890s Japan. Book 1 of a planned duology.

Death is her destiny.

Half British Reaper, half Japanese Shinigami, Ren Scarborough yearns for the acceptance she has never found among the Reapers who raised her. When the Shinigami powers she can no longer hide force her to flee for her life, Ren and her younger brother—the only being on earth to care for her—travel to Japan and the dark underworld of Yomi, where Ren hopes to claim her place among the Shinigami and finally belong.

But the Goddess of Death is no more welcoming than the Reapers who raised her, and Ren finds herself set on an impossible task—find and kill three yokai demons, and maybe, just maybe, she can earn a place in Death’s service. With only her brother and an untrustworthy new ally by her side, Ren will learn how far she’ll go to win the acceptance she craves, and whether the cost of belonging is worth any sacrifice.

The Keeper Night, by author Kylie Lee Baker, is the first installment in a planned duology. Ren Scarborough is a half English Reaper and half Japanese Shinigami in 1890's England. Her father doesn't recognize her, her step mother hates her, her bio mom is nowhere to be seen. Ren has been collecting souls in London for centuries, never accepted and perpetually tormented by the British Reapers for her otherness. One day after being taunted and teased and bullied, she severely wounds a High Reapers using her Shinigami powers setting off a life or death run to escape before she is caught and terminated

With her half brother Neven as her only ally, Ren flees London for Japan in hopes she can convince the Goddess of Death, Izanami, to allow her to join the Goddess’s ranks. Thankfully, Ren and Neven don't just show up days later. Their journey is fitful, Ren loses all her belongings, Neven is saddened at having found out his true worth, and by the time they reach Japan months later, Ren is road weary and in essence, questioning her sanity as to why she traveled so far to meet a woman, her mother, that she hasn't seen in centuries.

Upon arriving in Yokohama 9 months after leaving London, she and Neven encounter a Japanese Urban Legend, once of thousands of spirits that wrecked havoc on humans. They include Jorogamo, a yôkai with the form of a spider, that can change its appearance into that of a seductive woman when it wants to eat a human. Even when it is in its human form though, its reflection will show a giant spider. Upon meeting Izanami, the creator of all the Japanese Islands, she is ordered to hunt and kill three Japanese Yokai.

Hiro, like Neven, are unique characters who have their own choices to make. Ren’s story goes beyond just killing for the sake of becoming a Shinigami. It’s about being uprooted from the only home she's ever known and feeling untethered — a native to no land. She's considered to be a foreigner in Japan even though she is of Japanese heritage. She discovers things about herself that will keep you wanting to read more. In fact, the ending is the most thrilling part of this entire story thus leaving from for the final installment.