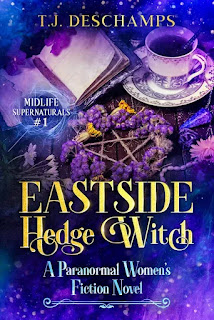 Twenty years ago, I stole something that could win the war between Heaven and Hell. Don't get me wrong, I'm no do-gooder. I wanted to rule everything with the King of Hell. However, I have serious qualms with killing 8 billion people in order to get what I want. He didn't. Irreconcilable differences, right?

So, I did what any witch would do. I faked my death and hid out in the Seattle suburbs, living as a mundane. Stay at home moms are practically invisible here!

I had a good thing going until a hellhound showed up on my morning run. Guess you can't thwart the devil's machinations and get away with it forever. Time to come out of the supernatural closet and save the world. Again.

Eastside Hedge Witch is the first installment in author T.J. Deschamps Midlife Supernaturals series. 42-year-old Miriam Diaz is a lone witch who has lived as a suburban mom on Seattle’s Eastside for the past seventeen years. She serves on the parent teacher association, bakes for her daughter’s cheer squad, and is an all-around champion stay-at-home mom. Pretty average and totally boring, and Miriam likes it that way. A witch likes to keep her secrets after all. But what happens when those secrets become dangerous to keep?

You see, years ago, Miriam escaped from Lucifer. She faked her own death, stole a library filled with powerful grimoire's that could literally destroy worlds, found love with a man, Rafael, who was a Orisha God, has a daughter, Jada, who is half witch, and have goddess, and able to shift into a panther, and once was Lucifer's Harbinger of the Apocalypse. Raf changed her name, and registered her as latent before he died and ascended. She has no idea who her own father was since her mother gave her to Lucifer who used Miriam as a play toy, and much more.

If her former coven finds out she's alive, they'll likely try to put her on trial and face possible execution. So you see, it's a good thing that Miriam kept her head down and pretended to be a normal. But when a hellhound shows up in her neighbor’s begonias, and Miriam banishes the stinky mutt back to where it came from, she receives unwanted attention from Gabriel who is the local archangel for the Angelic Anocracy. The Angelic Anocracy of the Pacific Northwest rules the supernatural community. This is a community of Nephilim, demi-gods, angels, fae, weres, and many more.

With Hell sending vampires and others to find Miriam, and Heaven at her doorstep, and a demon who helped her fake her own death telling her to run, Miriam must either flee the life she built or take a stand and come out of the supernatural closet. Enter Gabriel the Alpha male who has been on the outskirts of her life for a long time. He didn't intrude on her life when Raf was alive. Now that he's gone, Gabriel feels comfortable at pushing the limits in finding out if Miriam feels the same way.

Enter Phyr a Fae from her past who she forgotten but apparently grew up with and made a deal with. Phyr holds the keys to finding out who she really is, who her father is, and why there's a block on her memories. When he shows up, things really start to make sense, especially with the pixies in her garden acting like attendants and protecting her. Though most of the story takes place in the Pacific Northwest, there's part of the story that takes place in Fae where Miriam has to make choices whether to fully come out of the closet and tell the world who she is, or take her daughter and leave everyone behind.

This is the second book in a row that I've read where the character is in her 40's which is almost unheard of these days. I am appreciated that the author decided to write a book about Miriam's adventures. I would love to see what happens next, especially if Lucifer tries to regain control over Miriam, and whether or not her mother finds out what she's done. I'm not a huge fan of love triangles and hope that this issue resolves itself sooner, rather than later. Yes, you can fall in love with two people, but how much can your heart really take before it shatters and opens itself up to betrayal?