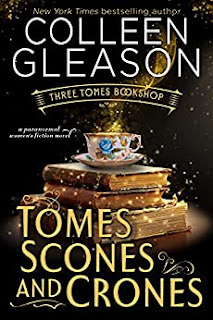 At forty-eight, Jacqueline Finch has a nice, easy life with few responsibilities: she’s been a librarian in Chicago for twenty-five years, she doesn’t have a husband, children, or pets, and she’s just coasting along, enjoying her books and a small flower garden now that she’s over the hill.

That is, until the Universe (helped by three old crones) has other ideas.

All at once, Jacqueline’s staid (and boring) life is upended, and the next thing she knows, she’s heading off to Button Cove to start a new life as the owner of Three Tomes Bookshop.

The bookstore is a darling place, and Jacqueline is almost ready to be excited about this new opportunity…until Mrs. Hudson and Mrs. Danvers show up. Somehow, the literary characters of Sherlock Holmes’s landlady and Rebecca deWinter’s creepy and sardonic housekeeper are living persons who work at the bookshop (when they aren’t bickering with each other). Not only does Jacqueline have to contend with them—and the idea that people regularly eat pastries while reading books in her store!—but the morning after she arrives, the body of a dead man is found on her property.

Things start to get even more strange after that: Jacqueline is befriended by three old women who bear a startling resemblance to the Witches Three from Macbeth, an actual witch shows up at her bookshop and accuses Jacqueline of killing her brother, and the two women who own businesses across the street seem determined to befriend Jacqueline.

The next thing Jacqueline knows, her staid and simple life is no longer quiet and unassuming, and she’s got crones, curses, and crocodiles to deal with.

And when a new literary character appears on the scene…things start to get even more hairy and Jacqueline is suddenly faced with a horrible life and death situation that will totally push her out of her comfort zone…if she’s brave enough to let it.

After all, isn’t forty-eight too late for an old dog to learn new tricks?

Tomes Scones & Crones is the first installment in author Colleen Gleason's Three Tomes Bookshop series. They say once you turn 40, and you are unmarried, you are an old crone. Take it from me, they don't know what they're missing not being tied down. Well, 48 year old Jacqueline Finch isn't ready to retire and settle down just yet. She has no husband thanks to her fiance cheating on her. She has no children, or animals, and her alleged friends are backstabbing bitches or steered her in the wrong direction when it came to dating, etc.

For 20 years, she was the resource librarian for the Chicago Public Library system. Then one day, thanks to the interference of three witches straight out of Macbeth casting (Andromeda, Pietra, and Zwyla), she's told that she's out of a job, and only given 5 days severance pay. What's worse is that a nasty rumor her and a married man turns alleged friends against her, and Jacqueline's home is sold right out from under her without any prior notification.

The only place she seems to have to go is a place called Button Cove, Michigan where she's inherited a bookshop called Three Tomes. The bookstore is a place where Jacqueline discovers characters like Mrs. Hudson and Mrs. Danvers who seem to run the store, along with two insolent cats named Sebastian and Max who more than steal the show. Somehow, literary characters of Sherlock Holmes’s landlady and Rebecca deWinter’s creepy and sardonic housekeeper are living persons who work at the bookshop (when they aren’t bickering with each other).

Not only does Jacqueline have to contend with them—and the idea that people regularly eat pastries while reading books in her store and drink tea, of all things! But the morning after she arrives, the body of a dead man is found on her property. Jacqueline soon meets the bearers of her bad and good fortune who bear a startling resemblance to the Witches Three from Macbeth. (Yes, my lovely followers, you will find out why they utterly destroyed Jacqueline's life in order to bring her to Button Cove.)

Later, an actual witch named Egala shows up at her bookshop and accuses Jacqueline of killing her brother Henbert, and the two women who own businesses across the street, Suzette Walley & Laura Clemson, seem determined to befriend Jacqueline. Jacqueline has to save her friends and the bookstore as well as help Mrs. Gulch, the misunderstood Wicked Witch of the book, not the movie, find revenge and get home. Let's not forget about the destined to be romantic inclination in Detective Miles who seems to be everywhere Jacqueline goes.

I think that one of the underlying context's of this story is that no matter what your age is, you can definitely start over if you change your unwillingness to try new things. Jacqueline does a whole lot of soul searching while being pushed by the three crones into opening her eyes to her new reality and finally decides that she doesn't need her so called former friends who turned away from her when the rumors started instead of standing with her. I am hoping that Suzette and Laura will be true friends to Jacqueline since they are all about the same age.

The sequel to this book, Purses, Curses, and Hearses, releases in February 2022. I'll likely continue reading this series to see what other literary characters crawl out of books and makes Jacqueline's life challenging.