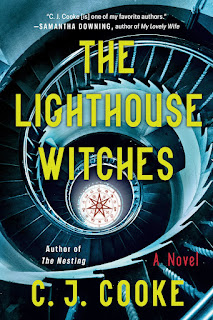 Two sisters go missing on a remote Scottish island. Twenty years later, one is found—but she’s still the same age as when she disappeared. The secrets of witches have reached across the centuries in this chilling Gothic thriller from the author of the acclaimed The Nesting.

When single mother Liv is commissioned to paint a mural in a 100-year-old lighthouse on a remote Scottish island, it’s an opportunity to start over with her three daughters—Luna, Sapphire, and Clover. When two of her daughters go missing, she’s frantic. She learns that the cave beneath the lighthouse was once a prison for women accused of witchcraft. The locals warn her about wildlings, supernatural beings who mimic human children, created by witches for revenge. Liv is told wildlings are dangerous and must be killed.

Twenty-two years later, Luna has been searching for her missing sisters and mother. When she receives a call about her youngest sister, Clover, she’s initially ecstatic. Clover is the sister she remembers—except she’s still seven years old, the age she was when she vanished. Luna is worried Clover is a wildling. Luna has few memories of her time on the island, but she’ll have to return to find the truth of what happened to her family. But she doesn’t realize just how much the truth will change her.

Author C.J. Cooke's The Lighthouse Witches is a story that spans 23 years. This story is based on historical events that happened in 1662 Scotland. Set on a remote Scottish island called Lon Haven, the setting intertwines with the story in unique and scary ways. The story told by three timelines and several POVs. The timelines also include a grimoire belonging to Patrick Roberts’s telling the events took place during the witch hunt, trials, burning them in stakes in 17th century,

The story begins in 1998, where Liz Stay has picked up her daughters and headed to a remove island where she has agreed to paint a mural for a reclusive millionaire named Patrick Roberts, who just happens to own an abandoned lighthouse called The Longing. What Liz doesn't know, will completely and fundamentally change her entire family. The cave beneath the lighthouse was once upon a time a prison for women accused of witchcraft. Before they’ve been burned at stakes, witches were tortured into admitting they were witches.

They also left something behind. When Saffy and Clover go missing, Liv also ends up disappearing after facing a life or death situation where she is forced to make hard choices. Flash forward 23 years, where we find a grown up Luna Stay in the year 2021. For 23 years, she's been searching for her mother, and her two sisters. She has little memories of what happened, only that her mother may have tried to kill her, and then abandoned her where she ended up in foster care.

When she receives a phone call that Clover has been found, she's dumbfounded. The strangest part is that Clover is still only 7 years old! How can that be possible? Clover, who is very pregnant and having relationship issues with her boyfriend, ends up back on the island that destroyed her family looking for clues as to why Clover is still only 7 years old, the same age she was when she disappeared without a trace. Luna is worried Clover is a wildling; a human replaced by the Fae.

What's even more disturbing is Clover's behavior. Luna begins to seriously wonder if Clover is a wilding, especially when she finds strange numbers on her sister. Luna has few memories of her time on the island, but she’ll have to return to find the truth of what happened to her family. But she doesn’t realize just how much the truth will change her. When you start to put together events of the past, with the future, you will find yourself wondering what else the author will come up with to throw you for a loop.

In conclusion, I really had some emotional feelings for Liv. Even though she was having some person issues, no spoilers, she could have been more communicative with her daughters on why she suddenly just picked up their belongings and traveled to a far off Island. She was played like a fiddle by her so called friends who twisted her thoughts. Sapphire was a real piece of work. She thought that she knew more than her own mother, and basically ignored her sisters. The two can't stand separately, and thus lots of what happens is because of lack of communication and understanding.