#Review - Crossbones (Kingdom of Bones #1) by Kimberly Vale #YA #Fantasy 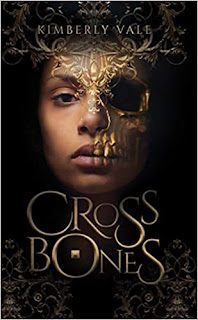 The Blood Bell tolls, marking the death of the pirate king and the start of the Trials―a heart-stopping competition where the reward is the Bone Crown. Only one contender can claim the coveted island throne; each will gamble life and limb to win.

Crossbones, by author Kimberly Vale, is the first installment in the authors Kingdom of Bones trilogy. This story revolves around (3) key characters: Csilla Abado, Kane Blackwater, and Lorelei Penny.

Captain of the Scarlet Maiden. Young Sister to Rhoda Abado, Csilla yearns to prove her strength to the seasoned pirates who balk at her youth and to her elder sister who has always craved Csilla’s captainship. After being betrayed, and handed over to the hated Incendian Navy who intended to humiliate her, before hanging her, she's saved at the last moment. When the Pirate King dies suddenly, The Bone Crown Trials soon takes place. Csilla will risk everything, including making an alliance with Kane and Lorelei and Flynn Gunnison to become the first pirate queen, no matter the cost.

Dealer. Son. Legacy. Captain of the Iron Jewel. Kane Blackwater is a young man haunted by the shadows of his wrong doings and desperate to prove himself worthy of his father’s ship, the Iron Jewel. The Bone Trials represent a new beginning―yet rumors of a secret heir are swirling, threatening his hopes of becoming the pirate king. He must join an alliance of those who would likely cut his throat rather than join him in working together. Yet, with a darkness rising, and an even deadlier adversary pushing people to do bad things, Kane will need to be on his toes.

Stowaway. Daughter. Storm. Lorelei Penny longs for nothing more than to avenge her mother’s death from a Pirate Captain searching for the Rathborne heir. Stowing away on the Iron Jewel was supposed to get her closer to the killer, but instead she finds herself caught up in the deadly battle where loyalty and desire collide. And, when the truth finally comes out about who she really is, darkness, and danger will test her limits as well as Csilla, and Kane to see who will be the first to open the Bone Chest and wear the Bone Crown.
It's fair to say that Lorelei is probably the most likable character in this book. She's been sheltered by her mother all her life, and not told who she really is. When her mother ends up murdered, she vows revenge, only to get swept up in a deadly game between pirates, and a vengeful villain just itching to break free from his confines. I liked Csilla, but really saw the betrayal coming a mile away. The ending obviously leaves room for the two sequels, so it will be interesting to see how she deals with what happend during the Trials. Kane is a broody, angsty, young man, who wants to prove himself that he can do goo things and make up for the bad things he's done . His relationship with Lorelei obviously needs to be explored to see what happens next.