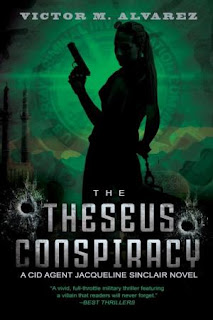 CID Special Agent Jacqueline Sinclair, the Army's famed counterterrorism agent, returns in this chilling and exhilarating sequel to Requiem for the Dead.

A ruthless scheme hatched by one madman threatens to plunge humanity into World War III!

With the theft of seven Russian nuclear suitcase bombs, rogue CIA double agent Matthew Banks code-name Theseus... with the execution of his wife and child at the hands of Russian FSB agents, and the CIA's treachery, plans his vengeance on Russia and the U.S.

In Germany, the U.S. Intelligence apparatus inadvertently intercepted Banks' nefarious scheme in a secure message from the Russians. Efforts in tracking Banks have been futile. While the American agents desperately search for answers, the terrorist sets his plan in motion. Sinclair must make the ultimate sacrifice for her country; can she stop Banks before the bombs go off?

The Theseus Conspiracy is the second installment in author Victor Alvarez's CID Jacqueline Sinclair's series. This novel jumps all over the globe. From Russia, to the US, to Germany, to Afghanistan. The novel begins with a SEAL Team entering Murmansk, Russia where they hope to free a double agent called Theseus. It quickly moves to Germany where the same SEAL team faces an FSB Special forces group out for revenge for what happened in Murmansk. Soon thereafter in Afghanistan, DIA Special Agent Tom Price and his squad are ambushed leaving him as the only survivor.

Matthew Banks, code name Theseus, is a rogue double agent of both the CIA and FSB who wants revenge for the execution of his wife and child. He blames the Russian FSB and the U.S. CIA. Having stolen seven Russian nuclear suitcase bombs, and putting together former Russian assets who want to overthrow the Russian leadership, has put together a  ruthless plan is to start World War III by taking out the Kremlin, CIA Headquarters and the Pentagon.

In Germany, the U.S. Intelligence intercepted Banks' scheme in a secure message from the Russians. This sets off a action packed rush to see who will survive the brutal slaughter of innocent people. CID Special Agent Jacqueline “Belle” Sinclair, the Army's famed counter-terrorism agent who saw her best friend end up dead because of Theseus, is pulled into the situation. This is a global conspiracy but can Sinclair stop Banks before the bombs go off in the race against time?

Unfortunately, Belle learns of Tom's situation but has little time to dwell on his situation whether he will live or not as she quickly receives word that the world has a massive problem, and that problem’s name is a madman named Theseus. She and her team are targeted over and over again by Russians who don't want Belle to know what is really happening. At times, this book has so many different characters that it is hard to keep track of them unless you take good notes.

The one bad thing about this story is that it doesn't come to a conclusion, but leaves room for the sequel which has been named The Price on Her Head. We all know who this story is about and who the villain is going to be. The most unfortunate part of this story is that even though this is Belle's story, she is relegated to the side for a whole lot of the story. I'm not a fan of naming a series after a character and then having other people like Banks grab hold of most of the plotlines.