#Review - Our Violent Ends by Chloe Gong #YA #Fantasy #Historical 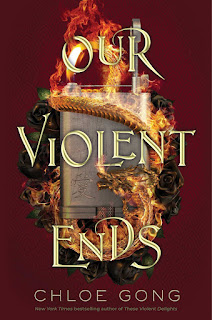 The year is 1927, and Shanghai teeters on the edge of revolution.

After sacrificing her relationship with Roma to protect him from the blood feud, Juliette has been a girl on a mission. One wrong move, and her cousin will step in to usurp her place as the Scarlet Gang’s heir. The only way to save the boy she loves from the wrath of the Scarlets is to have him want her dead for murdering his best friend in cold blood. If Juliette were actually guilty of the crime Roma believes she committed, his rejection might sting less.

Roma is still reeling from Marshall’s death, and his cousin Benedikt will barely speak to him. Roma knows it’s his fault for letting the ruthless Juliette back into his life, and he’s determined to set things right—even if that means killing the girl he hates and loves with equal measure.

Then a new monstrous danger emerges in the city, and though secrets keep them apart, Juliette must secure Roma’s cooperation if they are to end this threat once and for all. Shanghai is already at a boiling point: The Nationalists are marching in, whispers of civil war brew louder every day, and gangster rule faces complete annihilation. Roma and Juliette must put aside their differences to combat monsters and politics, but they aren’t prepared for the biggest threat of all: protecting their hearts from each other.

Our Violent Ends, by author Chloe Gong, is the second and final installment in the authors These Violent Delights duology. This story picks up 4 months after the ending of These Violent Delights. The story once again alternate's between Juliette Cai and Roma Montagov heirs of the Scarlet Gangs and White Flowers. The blood feud between gangs has taken a toil on everyone involved, but Juliette can't let her guard down with her cousin Tyler chirping at her heels waiting for her to make a mistake that will bring her down.

On the other hand, Roma is seeing blood after the loss of Marshall Seo at the hands of Juliette. It had been only three months, but Roma has changed. From the bodies piling up farther and farther inward into Scarlet territory lines, as if the White Flowers were testing the limits they could encroach upon. It was unlikely that Roma had sought out Scarlets specifically for vengeance killings—he didn’t have it in him to go that far—but each time a conflict erupted, the message left behind was clear: This is your doing, Juliette.

Ever since the city caught wind of a confrontation between Roma and Tyler Cai, the blood feud has shot into its most terrible heights. Neither gang needed to worry about their numbers being picked off by the madness anymore. Now the White Flowers were pressing down on the Scarlet Gang with a renewed urgency, and the Scarlet Gang were fighting back just as hard. They had to. No matter how carefully the Scarlet's cooperated with the Nationalists, every single person in this city could feel something shifting, could see the gatherings grow larger and larger each time the Communists attempted a strike.

Then comes the blackmail letters saying that the blackmailer has the recipe to once again unload the monster who terrorized Shanghai and put everyone on edge. It isn't just one gang over the other that the letters are being sent. It's both of them which finally leads to a semi-armistice between the gangs with Juliette and Roma taking the lead. But someone doesn't want them to be successful. At every turn, there is someone there to thwart their efforts. To make matters even more disturbing for Juliette, her cousins Kathleen and Rosalind are blurring the lines as to which path they will eventually take.

There are many different sub-plots going on in this book. There's multiple power struggles, multiple love stories, and multiple battles and enemies. The ending was also a huge disappointment, not very memorable. I kept waiting for the author to say, Just Kidding! But with a title like Our "Violent" Ends, you can pretty much expect anything to happen which it does. Again, I say this, the author does a fantastic job of incorporating actually history into this series. She really understands the nuisances of how the people of Shanghai, and China as a whole, were dealing with both Communists and Nationalists wanting to take over the country and kick out all foreigners who split the city and country into chunks of their own.