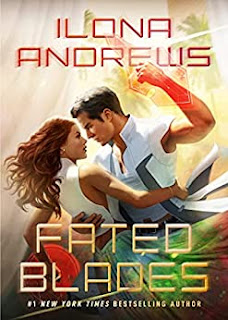 An uneasy alliance between warring families gets heated in this otherworldly novella from bestselling author Ilona Andrews.

At first glance, the planet Rada seems like a lush paradise. But the ruling families, all boasting genetically enhanced abilities, are in constant competition for power—and none more so than the Adlers and the Baenas. For generations, the powerful families have pushed and pulled each other in a dance for dominance.

Until a catastrophic betrayal from within changes everything.

Now, deadly, disciplined, and solitary leaders Ramona Adler and Matias Baena must put aside their enmity and work together in secret to prevent sinister forces from exploiting universe-altering technology. Expecting to suffer through their uneasy alliance, Ramona and Matias instead discover that they understand each other as no one in their families can—and that their combined skills may eclipse the risks of their forbidden alliance.

As the two warriors risk their lives to save their families, they must decide whether to resist or embrace the passion simmering between them. For now, the dance between their families continues—but just one misstep could spell the end of them both.

Fated Blades by authors Ilona Andrews is the third installment in the Kinsmen series. Truth in reviewing, I have NOT read the previous two installments Silent Blade or Silver Shark as they came out in 2009 and 2011. Borrowing from the intro to one of the earlier books: humans needed to be “enhanced” to facilitate spreading across the galaxy - able to survive harsh conditions, or be fierce hunters or warriors, or make brilliant scientific advances. And some of these enhancements were biological, and could be passed down through the generations.

Since, however, humans were still basically human, the folks who had these genetic advantages soon wanted to keep them to themselves, and thus the Kinsmen families were born. Fated Blades features two such families the Baenas and the Adlers, both with the ability to generate deadly swords or impenetrable shields from their bodies on a moment’s notice. The “secare” originally were soldiers created to fight in a vicious war, but have dispersed in the decades since.

The Baenas and Adlers settled on the same planet along with a third family, the Davenports. In true Montague-Capulet fashion, the families are sworn enemies. So when the wife of Matias Baena and the husband of Ramona Adler not only have an affair, but more importantly, steal precious business secrets, heads are going to roll. Quite literally. This story alternates narratives between Matias and Ramona. The two families have repeatedly clashed for 150 years.

So they put a sort of truce in place to find the culprits before they destroy both families and give highly valuable technology to a group known as The Vandals who Matias has had the displeasure of meeting. What follows is a classic space opera, as they race across Rada and back, fighting battles, sharing a few moments of downtime, and learning more about each other as they go. And of course, as with all epic adventures, there’s a show-stopper of an ending – or actually two show-stoppers if you count the epilogue…

With a bit of research, I found out that this book takes place on Planet Rada where Silent Blade took place. I also found out that Amazon is currently selling the two previous books together. Even though I enjoyed this story overall, I felt as though this was more of an after thoughts to keep fans happy. Thanks to Covid and the authors fear of offending someone because they were set to release a dark book in what they're calling, the dark times, ergo we get Fated Blades instead.