#Review - In Every Generation by Kendare Blake #YA #Paranormal #Fantasy 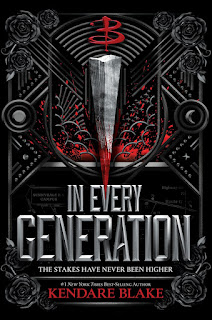 Frankie Rosenberg wasn't yet alive when her mom, Willow, her aunt Buffy, and the original Scooby Gang destroyed the Hellmouth and saved the world from the First Evil. These days, life in New Sunnydale is blissfully quiet. Frankie is just trying to survive her sophomore year at the rebuilt high school and use her budding magical powers to make the world a better place.

But that world is suddenly plunged into danger when the slayer community is the target of a deadly attack, leaving the future of the line uncertain. Then Frankie discovers she's sort of freakishly strong. Oh, and there's something Willow never told her about her true identity.

Quicker than she can carve a stake, Frankie discovers there's more to saving the world than witty one-liners and stupid hot demons. now everyone looks to her for answers, but speaking up has never been her strong suit. And it's hard to be taken seriously when your mom is such a powerful witch she almost ended the world once, while your greatest magic trick is recycling.

Despite the many challenges standing in her way, Frankie must assemble her own bumbling Scooby Gang, get dressed up in Buffy's (vintage '90s) clothes, and become a new slayer for a new generation—before whatever came for the rest of the slayers comes for her next.

“Into every generation, a slayer is born: one girl in all the world, a chosen one. She alone will wield the strength and skill to fight the vampires, demons, and the forces of darkness; to stop the spread of their evil and the swell of their number. She is the Slayer.”

Kendare Blake's In Every Generation begins a brand-new reimagining of the Buffy the Vampire Slayer universe. This story takes place 18 years after the curtains fell on the Buffy TV series. This series features the next generation of Scoobies and Slayers who must defeat a powerful new evil. A Buffy superfan herself, Blake deftly creates a new story within the Buffy world, fresh and exciting enough for those unfamiliar with the series, and rich enough to satisfy existing fans. This series is timed to launch with the 25th anniversary of the Buffy the Vampire Slayer TV show, when hunger for all-things Buffy will be high.

16-year-old Hailey Larsson is the younger sister of a Slayer named Vi. Vi and her fellow slayers are getting together this year for something called Slayerfest which is a regular gathering of all the remaining slayers in Halifax. But something goes horribly wrong. Hailey has been kept secret by Vi who wanted to protect her. Hailey has grown up knowing about the supernatural world and knowing she has to keep it a secret. She has also secretly been training so that she could help her sister. When Spike, Vi's watcher, shows up at her house, Hailey finds herself taken to Sunnydale, the former home of Buffy and her Scooby gang.

16-year-old Frankie Rosenberg is a sophomore at New Sunnydale High School, and the daughter of the most powerful witch in Sunnydale history. She calls herself an eco-witch. Her mom, Willow, is slowly teaching Frankie magic on the condition that she use it to better the world. But Frankie’s happily quiet life is upended when Hailey & Spike show up with news that the annual Slayer convention has been the target of an attack, and all the Slayers—including Buffy, Faith, and Hailey’s older sister Vi—might be dead. That means it’s time for this generation’s Slayer to be born.

And, for the first time in history, Frankie is the first Slayer Witch. Gone are the days of one watcher, and one slayer. Girls now are magically chosen at birth to be the next slayer if one dies before they are ready. In fact, Giles, one of the original Buffy Watchers, is so far off the screen that he is not a factor in this story. Frankie's origin story is pretty interesting and no, I am not going to spoil anything. Frankie and her new friends and old friends have to deal with a dangerous character called Hunter of Thrace, as well as the Countess who has been told that Sunnydale is free of slayers.

I understand that there are some of you folks who haven't watched the original Buffy TV show, so, Spike (James Marsters), Willow (Alyson Hannigan), Oz (Seth Green) are active characters from the series. Xander, with Buffy's sister Dawn, calls in with regular updates often and things don't look so good for our beloved Slayers. Vi was the slayer played by Felicia Day in the last season of Buffy. Sigmund, a half-demon who is the son of one of Willow’s demon friends, is a new character who steps up and stays to help out.

One of the hardest things to do as a reviewer is to stay as far away from spoilers as possible. No, I will not tell you which slayers are no longer with us. I will say that there is a brief appearance by one of them who then immediately dashes off stage as soon as the villain is defeated. The author does her best to incorporate the Buffy-style campy dialogue and it's nice to see that Frankie is a bit like Buffy in that she never expected to be chosen as the next Slayer. With the gaping whole of an ending, I am definitely eager to see what happens next, and whether or not we will get the answers we need about any possible survivors.