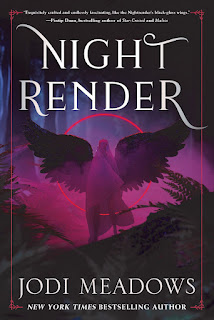 Kingdoms will fall, gods will die, and hearts will be broken in this sprawling new fantasy from New York Times bestselling author Jodi Meadows.

In the middle of nothingness is the Island of Salvation.

Reality bends easily here. Villages disappear. Forests burn forever. Pockets of inconsistent time are everywhere, their boundaries strung with yellow ribbon. And the three kingdoms of Salvation have been at war for a thousand years.

But the greatest threat is the Malice, an incursion from the demon plane slowly tearing its way through the world’s weakest seams. Seams that—once split—will lead to the total unraveling of night and day, light and dark, life and death.

Not that the human world takes much interest. Of more concern is the upcoming marriage of Rune Hightower, Prince of Caberwill, and Johanne Fortuin, Princess of Embria—the serpent bride, a girl of famous cunning—which offers a possible end to the ancient conflict. But Rune has noticed the growing darkness, and he is determined to summon mankind’s only defense: Nightrender, the hammer of the gods, an immortal warrior more weapon than girl.

There is only one problem. The last time she was summoned, she slaughtered every royal in Salvation, and no one knows why. Will she save humanity from the Malice… or plunge it deeper into the fires of eternal war?

Nightrender is the first installment in author Jodi Meadows Salvation Cycle duology. The story revolves around three characters: Johanne (Hanne) Fortuin, Princess of Embria—the serpent bride, a girl of famous cunning—which offers a possible end to the ancient conflict. Rune Hightower, Prince of Caberwill, elevated to the position of Crown Prince thanks to his brothers murder by an assassin. Rune has noticed the growing darkness, and he is determined to summon mankind’s only defense. Nightrender, the hammer of the gods, an immortal warrior more weapon than girl. Nightrender herself, an immortal warrior--more weapon than girl--sworn to defend mankind even after a terrible betrayal.

This is a pretty curious world. It appears as though the rest of the world has fallen to the darkness and only a continent called Salvation remains. Salvation is divided between three warring countries: Embria, Caberwill, and Ivasland. The Winterfast accords divided the world of the humans from that of the Malstop, fed by the dark human compulsions and overrun with demon-like creatures called Rancor that use the weakening borders to break into the human world with their dark magic called malice. Malsites dot the landscape, trapping and torturing humans that stumble upon them.

The Veil is weakening, and one of the three kingdoms, Ivasland, is poised to break the Winterfast Accords. To prevent this, Embria and Caberwill, the other two kingdoms, have forged a treaty to be signed in marriage of their heirs, Hanne and Rune, respectively. 400 years ago, the Malice came to Salvation and was defeated by the Nightrender who has been sleeping for hundreds of years, waiting for someone to awaken her so she can use her power to save the land of Salvation. When she's finally summoned, she realizes the world around her is not as she remembers, and neither are her memories.

Hanne has accepted that she will one day be queen of the entire Salvation if her devious plans fall into place. She even has her cousin Nadine along for the ride which we see through diary entries. Her first stop is to marry the Crown Prince of Caberwill and then destroy Ivasland which seems to be more technology based than the other two countries. It also appears as though Ivasland has broken the accords which means war is definitely imminent. While the three countries have been warring on each other, they have ignored the most dangerous threat to the entire continent for the first time in 400 years.

After Hanne is caught in a Malsite, she is confronted by a Rancor who tells her she will teach her hated enemies how to build a terrible weapon. A terrible weapon that might bring down the Veil forever. Meanwhile, Rune summons Nightrender who seems to have lost a whole lot of her past memories. Nightrender is a weapon created by long gone Gods that is supposed to stand in front of the darkness and protect the light. The weapon that failed 400 years ago, killing 99 percent of all Kingdom's royalty except for a missing princess who hasn't been seen.

And, to make it even more unbearable, it seems her memories keep floating away without any explanation as to why. Rune also has a curious connection to Nightrender which makes his pending marriage to Hanne that much more interesting and Hanne that much more despicable for her own actions. Rune was a very sensitive man who wanted someone to love him and that person is not Hanne. There were those within his own family who would have preferred that one of his younger sisters was elevated to Crown Princess instead.

The speculative fantasy setting may be the distant past—or the distant future—and the reality-bending elements Jodi employs add a unique freshness to the fantasy storytelling. Think Rory Power meets Sarah Maas. Nightrender is commercial fantasy at its best—warring kingdoms, young love, gods and demons, world-ending stakes, deadly magic, cliffhanger ending—perfect for fans of hits like Furyborn, Sorcery of Thorns, Four Dead Queens, and A Court of Roses. This is a world of filled with danger, magic, and insidious politics and games played by several devious individuals. The stakes couldn't be much higher with heart rendering cliffhanger ending.

*Note* Even though this is sold as young adult, the age group the main characters fall in is more like 20-24 which is new adult. Curious if the publisher has an plans to change that focus.