#Review - The Red Palace by June Hur #YA #Mystery #Historical 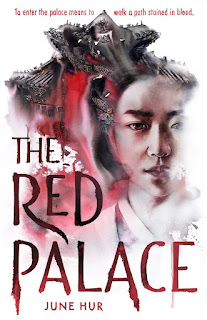 A young palace nurse investigates a pattern of grisly murders in this romantic YA historical mystery from the author of The Silence of Bones.

Joseon (Korea), 1758. There are few options available to illegitimate daughters in the capital city, but through hard work and study, eighteen-year-old Hyeon has earned a position as a palace nurse. All she wants is to keep her head down, do a good job, and perhaps finally win her estranged father's approval.

But Hyeon is suddenly thrust into the dark and dangerous world of court politics when someone murders eight palace nurses in a single night, and the prime suspect is Hyeon's closest friend and mentor.

In her hunt for the truth, she encounters Eojin, a young police inspector also searching for the killer. When evidence begins to point to the Crown Prince himself, Hyeon and Eojin must work together to search the darkest corners of the palace to uncover the secrets behind the bloodshed.

The Red Palace, by author June Hur, is a story takes place in 1758 Joseon-era Korea. The story surrounds 18-year old, Baek-Hyeon, who works as a palace nurse, a position she has worked very hard to attain. After overcoming a difficult childhood, with a mother who looks down on her, and a father who won't acknowledge her existence, she’s accomplished more than anyone expected a girl from her background would do. In Joseon-Era Korea, nurses are handpicked to serve in the palace.

Normally they are attached to women princesses, concubines, and court ladies since it is illegal for a man to touch a female. As the illegitimate daughter of a powerful man, who just happens to be Minister of Justice, Hyeon was limited in her options. But all that Hyeon has done is threatened one night when she’s summoned to watch over a member of the royal household, then sworn to secrecy to what she sees. Upon leaving the palace that same day she learns that a massacre has taken place at her former nursing school, and her beloved mentor, Nurse Jeongsu, has been arrested for the crime.

When Hyeon's beloved mentor, Nurse Jeongsu, gets arrested for the crime, Hyeon knows there's been a mistake. There is no way her caring teacher, a woman who has dedicated her life to helping others, including taking her in when she was discarded by her mother, could possibly be capable of the callous brutality of this massacre. Hyeon's desperate to save Jeongsu from the clutches of the police force, known for their brutal interrogations, and she doesn't have much time. Therefore, Hyeon decides she needs to begin her own secret investigation into the murders.

Along the way she meets Eojin, a young police inspector, who teams up with her to uncover the truth behind the Hyeminseo Massacre, but will anything they find actually make a difference? Eojin had his own complex backstory and motivation for wanting to get to the bottom of these crimes, which added to the general mystery. In the face of the dark secrets they begin to uncover involving every level of palace politics, Hyeon and Eojin seem so small, young and inconsequential. They're both willing to take incredible risks in the pursuit of justice though and that should count for something.

Hyeon was a powerful and brave protagonist, kickass despite being untrained in any martial arts, and a true example to women everywhere that there is more to strength than physical ability. Eojin is the youngest investigator from the capital that is tasked to investigate the murders. He is calculative, trust worthy, and the calm that is the perfect balance to Hyeon’s chaos. The Red Palace is an amazing stand alone mystery thriller that will transport you to the darkest depths of the Joseon dynasty filled with murder, political scheming, cover ups, and gripping crime solving.

The Red Palace is loosely based on the life and death of Crown Prince Sado, also known as Crown Prince Jangheon, was the second son of King Yeongjo of Joseon Feb 13, 1735 - Jul 12, 1762 (age 27). At the age of 27, he was executed at order of his father and died of starvation by being confined in a rice chest. Brutal way to die.