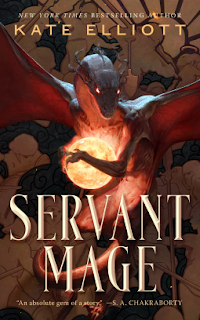 In Kate Elliott's Servant Mage, a lowly fire mage finds herself entangled in an empire-spanning conspiracy on her way to discovering her true power.

They choose their laws to secure their power.

Fellian is a Lamplighter, able to provide illumination through magic. A group of rebel Monarchists free her from indentured servitude and take her on a journey to rescue trapped compatriots from an underground complex of mines.

Along the way they get caught up in a conspiracy to kill the latest royal child and wipe out the Monarchist movement for good.

Kate Elliott's Servant Mage is a 170 page novella that focus on a woman named Fellian. Fellian is the daughter of parents who were executed for wanting to help out others. She was later sent to an asylum where she was brainwashed into following the laws of the Liberationists. Fellian herself is a Lamplighter, able to provide illumination through magic. Her magic is not common place.

When an aether Adept named Shey shows up claiming to be searching for something that was allegedly eliminated from the servants asylum in Alabaster City, Fellian is pulled into a political conspiracy against her will by a man once known as Jojen, the Wolf, who is fighting against the Liberationists and August Protector who once dethroned the Monarchists.

They also need her help rescuing trapped compatriots from an underground complex of mines. As a background, all members of the royal family were executed 30 years ago. No royal child of the dragon lineage has been born in the years since. Dragon-born children still fall into this world, even if the August Protector has vowed to rid the land of the last of them. You're asking yourselves what? Dragon-born children are born because there are rifts between the land and the aether that allows elementals to take root.

Some call them demon-wraiths, others call them soul-wraiths. Some people are born with a soul-wraith bound into their bones as a slumbering elemental of earth, water, air, fire, and aether. The dragon born are rare because they alone have all five elements bound into them. Were it not for oracles, Fellian would have lived a normal life, and not been sent to the asylum. But non of that matters. All Fellian wants is travel papers, cash, and to be brought close enough to her home area that she could realistically reach her home.

Their quest is fast-paced, all-encompassing, and violent, with shocking moments—including a graphic infanticide—showing the brutality of this world and its inhabitants’ desperate fight for power. In limited space, Elliott builds a refreshingly complex world with a magic system not linked to familial lineage and with realistically thorny politics, as neither the Liberationists nor the Monarchists are depicted as infallibly good for the people.

I would be remiss if I didn't mention the other part of the group called a five-arrow quiver; Haolu, earth mage and Invi, air mage. I would also be remiss to say that this book ends on a hanging Chad, which if you live in Florida, you know what I'm referring to. We're not sure what the author intended by introducing these characters and not continue as part of a more in-depth series.