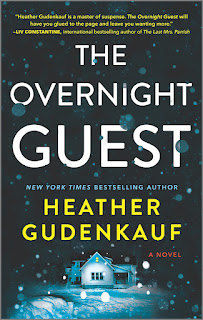 From the bestselling author of Before She Was Found comes a chilling locked-room mystery about a true crime writer who is trapped in a secluded farmhouse during a snowstorm, perfect for fans of Ruth Ware and Lucy Foley.

In a snowstorm, the safest place is home. Or is it?

True crime writer Wylie Lark doesn’t mind being snowed in at the isolated farmhouse where she’s retreated to write her new book. A cozy fire, complete silence. It would be perfect, if not for the fact that decades earlier, at this very house, two people were murdered in cold blood and a girl disappeared without a trace.

As the storm worsens, Wylie finds herself trapped inside the house, haunted by the secrets contained within its walls—haunted by secrets of her own. Then she discovers a small child in the snow just outside. How long had the child been there? Where did he come from? Bringing the child inside for warmth and safety, she begins to search for answers. But soon it becomes clear that the farmhouse isn’t as isolated as she thought, and someone is willing to do anything to find them.

The Overnight Guest, by author Heather Gudenkauf, is the story about a woman who receives an unexpected visitor during a deadly snowstorm and has to fight for her life as well as the life of her visitors against true evil. I will begin by saying that you should be prepared for anything in this book. I will also say that the author uses (3) distinct storylines to tell her story. One is from the year 2000, one is from a girl who will remain nameless until the ending who is stuck in a basement with her mother, and the other from a woman who has turned to writing true crime in order to deal with her own ordeals as a teenager.

True crime writer Wylie Lark has been in Blake County for the past 6 weeks. She's in the process of writing her fourth true crime novel about a 20 year old crime that took place right in this county. Wylie is a bit skittish. She runs from people. She's turned her back on her son, and her ex-husband in order to be by herself. She's not afraid of being stuck in an isolated farmhouse with her dog Tas, her geriatric coonhound mix. She's also not afraid of the fact that this house was the place where two people were murdered in cold blood and a girl disappeared without a trace 20 years ago.

Wylie is known for her true crime research and she takes it to another level staying in a house that a horrendous crime took place. As the storm worsens, Wylie finds herself trapped inside the house, haunted by the secrets contained within its walls—haunted by secrets of her own, and without any way to contact the outside world. Then she discovers a small child in the snow just outside. After bringing the child inside for warmth and safety, she begins to search for answers. The child won’t speak to her, and Wylie can’t seek help as the phone lines are out and the roads are impassable.

Searching for evidence of the child's appearance, she locates a wrecked vehicle with a deeply battered woman entangled in barb wire. When she runs to retrieve something to free her,  the woman disappears. Everything that could go wrong does, of course. Between the blizzard, the lack of electricity and the internet, no one is safe. The tension is high and the chill in the air is palpable. But soon it becomes clear that the farmhouse isn’t as isolated as she thought, and someone is willing to do anything to find them. A man who Wylie had always thought of as a killer shows up, and later another man who is searching for the woman and child who escaped from their basement prison wants them back and Wylie is standing in his way.

In August 2000, two best friends, Josie Doyle and Becky Allen are having a sleep over when things get bad in a real hurray. Josie's brother is out of control and angry at their parents. While outside trying to find out where the loud sounds are coming from, Josie is shot, and Becky disappears without a trace. It's later revealed that Josie's parents were murdered in cold blood, and her brother Ethan is also missing and presumed to be the killer of his own parents.

The third perspective in this book is shocking and heartbreaking. Is is told by a girl who is locked up in a basement with her mother and treated inhumanely. How long have they been there? This part was hard to read and my least favorite. Don't want to give anything away, so I'll stop here. One of the things I can tell you without spoiling anything is that you should hold onto your hat because all three storylines come together in a stunning ending that will leave you breathless.