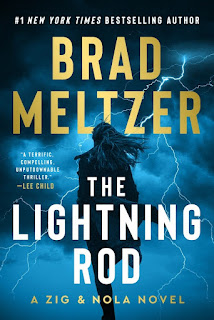 “Trust me, this is a terrific, compelling, unputdownable thriller."  — Lee Child

Archie Mint has led a charmed life—he’s got a beautiful wife, two impressive kids, and a successful military career. When he’s killed while trying to stop a robbery in his own home, his family is shattered—and then shocked when the other shoe drops. Mint’s charmed life, so perfect on the surface, held criminal secrets none of them could have imagined.

While working on Mint’s body before his funeral, mortician “Zig” Zigarowski discovers something he was never meant to see. That telling detail leads him to Dover Air Force Base, where he uncovers Mint’s involvement in a top-secret military unit and his connection to military artist Nola Brown. Two years ago, Nola saved Zig’s life—so he knows better than most that she’s as volatile and dangerous as a bolt of lightning.

Everyone wants to talk to Nola, but she’s not cooperating—and indeed doesn’t want to be found. In order to track her down, Zig teams with Nola’s long-missing brother, who’s just as combustible as she is. As they follow Nola’s trail, they discover one of the U.S. government’s most intensely guarded secrets—an undisclosed military facility that dates back to the Cold War and holds the key to something far more sinister: a hidden group willing to compromise the very safety and security of America itself.

The Lightning Rod, by author Brad Meltzer, is the second installment in the authors Escape Artist series. This story picks up two years after the ending of The Escape Artist. Zig and Sgt. Nola Brown are the lead characters in this series. She's a mysterious, enigmatic loner who seems to have trouble following her wherever she goes, who was artist-in-residence for the U.S. Army, and who at best can be called antisocial. He has the heart of a lion and will stop at nothing to protect those he loves, and formerly worked as a mortician for Dover Air Force base. Together they form a highly combustible, mesmerizing team.

Zig, a meticulous mortician, now working in the private sector, is still reeling from events from two years prior as well as the death of his daughter over a decade ago. This time around, readers get a brief storyline between Zig and his former wife who moved on with someone else after the shocking death of their daughter. But, the story actually begins with Jim "Ziggy" Zigarowski getting a call from Wil from Dover asking him to take up the case of one Lt. Colonel Archie Mint who was murdered in cold blood along with a valet who was notorious for stealing from the rich.

When Wil says that Mint is one of theirs, Zigs internal warning goes off, and he soon realizes that something is wrong. Archie Mint led a charmed life, he’s got a beautiful wife, two impressive kids, and a successful military career. When he’s killed while trying to stop a robbery in his own home, his family is shattered—and then shocked when the other shoe drops. Mint’s charmed life, so perfect on the surface, held criminal secrets none of them could have imagined. To make matters even more twisted, Nola knew Archie from work at a secretive operation that was set up in case the US was hit with a nuclear explosion, or zombie apocalypse.

During Mint's funeral, Zig is stupefied to find armed federal agents are present. Nola is also at the funeral, and appears to be running from something or someone. Everyone wants to talk to Nola, including her twin brother Roddy who appears suddenly out of nowhere after years of being separated. But Nola isn't cooperating; indeed doesn’t want to be found. Zig soon discovers that Roddy, now a cop, is just as combustible as she is. There is something really wrong with this case, and if he looks too deeply, he's going to be stuck in the middle of a major conspiracy with deadly consequences.

As they follow Nola’s trail, the trail leads to a top secret military facility (reminiscent of the 112,544-square-foot underground bunker at The Greenbrier Resort in West Virginia that was built to protect all members of Congress during the Eisenhower administration). Bad things happened at at the facility long ago, and it looks as if what's about to happen now may be even worse. This book also contains a storyline from Zig's friend Amy Waggs who doesn't exactly like how Nola has treated Zig.

Waggs just wants to get to the truth, but what truths will she uncover? There's also a group of assassins called The Reds who appear to be working as a clean up crew to prevent secrets from being exposed. Chapters shift from current happenings to Nola and Roddy's traumatic childhood years to perspectives of other characters, thus giving readers interesting and important background information that, of course, comes together at the end.

This story was a wild ride, and I know that per the publisher, there's another story forthcoming soon. I'll be waiting.