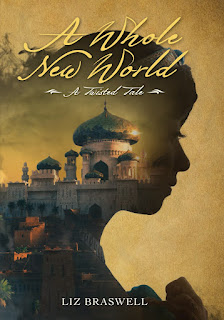 What if Jafar was the first one to summon the Genie?

When Jafar steals the Genie’s lamp, he uses his first two wishes to become sultan and the most powerful sorcerer in the world. Agrabah lives in fear, waiting for his third and final wish.

To stop the power-mad ruler, Aladdin and the deposed Princess Jasmine must unite the people of Agrabah in rebellion. But soon their fight for freedom threatens to tear the kingdom apart in a costly civil war.

What happens next? A Street Rat becomes a leader. A princess becomes a revolutionary. And readers will never look at the story of Aladdin in the same way again.

A Whole New World, by author Liz Braswell, featuring Aladdin, kicks off a brand new YA line called Twisted Tales which takes classic Disney films and twists them into compelling, aged-up adventures. Each book will start off with the events of the familiar film before a "what if" moment is introduced, instantly propelling readers into an alternative history which develops the familiar, beloved characters in a fresh new way. The story almost assumes the reader is familiar with the Disney characters.

Unlike other fairytale retellings in the market, these books play upon recognizable Disney characters, worlds, and iconography, appealing to young and new adults who grew up with these stories and have a nostalgic attachment to them. This story features the same characters you would find in Aladdin. Aladdin, of course, Prince Jasmin, Genie, and Jafar. The story takes place in Agrabah. Aladdin is one of the Street Rats who live in the poorest section of town. It's filled with thieves, beggars, murderers and poor children who no one wants.

Aside from a few details like Aladdin's mom making a brief one-chapter appearance, this book sticks mostly to the 1992 movie. Then the twist happens. After a chance run-in with Princess Jasmine, Aladdin, a poor street rat, ends up arrested. An old man promises riches beyond his imagination, enough to even possibly buy himself into being a Prince and then eligible to marry Jasmine. All he has to do is get the old man an old lamp. One could say that at this point, things are going to get much darker.

When Jafar does not hold up his part of the bargain and takes the lamp for himself, chaos ensues in Aladdin's village, and Jasmine, Aladdin, Morgiana, and friends must rage a war against Jafar and his army, which includes zombies. Abu and Rajah were there as well, though Abu didn't have his same spunk. There is a whole new aspect of this story that may not appeal to those who watched the original movie. In fact, it's a bit offsetting. We know that no matter what happens, whether Jasmine becomes a rebel against Jafar, that the ending will likely be predictable.

I would say that if you want to read this book, borrow it from a friend, or the library. That way if it let's you down, you won't waste any money.