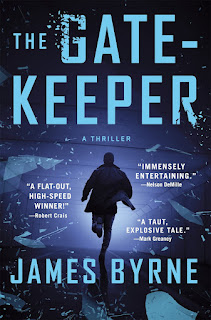 Introducing Dez Limerick - "a welcome blast of freshness"* and "the most exciting new character I've read in years"** -- in the most anticipated new thriller in years.

A highly trained team of mercenaries launches a well-planned, coordinated attack on a well-guarded military contractor - but they didn't count on one thing, the right man being in the wrong place at the right time.

Desmond Aloysius Limerick (“Dez” to all) is a retired mercenary, and enthusiastic amateur musician, currently in Southern California, enjoying the sun and sitting in on the occasional gig, when the hotel he's at falls under attack. A skilled team attempts to kidnap the Chief legal counsel of Triton Expeditors, a major military contractor – in fact, Petra Alexandris is the daughter of the CEO – but their meticulously-planned, seamlessly executed scheme runs into the figurative 'spanner-in-the-works,' Dez himself.

After foiling the attack, and with nothing better to do, Dez agrees to help Alexandris with another problem she’s having – someone has embezzled more than a billion dollars from her company and left very few tracks behind. But Dez is a gatekeeper – one who opens doors and keeps them open – and this is just a door of another kind. And the door he opens leads to a dangerous conspiracy involving media manipulation, militias, an armed coup, and an attempt to fracture the United States themselves. There’s only one obstacle between the conspirators and success – and that is Dez, The Gatekeeper.

The Gatekeeper, by author James Byrne, is one that fans of Jack Reacher and Orphan X will sure to love. The story begins in Algeria, and ends in California. Desmond Aloysius Limerick (“Dez” to all) is a retired mercenary, and enthusiastic amateur musician, currently in Southern California, enjoying the sun and sitting in on the occasional gig, when the hotel he's at falls under attack. After finishing a 3 hour set at Hotel Tremaine, Dez spots the glint of a scope from a sniper on the roof of the next building, aimed at the entrance of the hotel.

He watches as a van pulls up, the doors open, and four men pour out. The men are dressed all in black and obviously armed. Dez finds that the phones and alarms have all been disabled. Dez steps into trouble by foiling a kidnapping attempt on Petra Alexandris, the chief legal counsel for Triton Expeditors, a multi-billion-dollar military contractor. After temporarily landing in a L.A. Country jail, where he meets Detective Beth Swain. After he's released, Dez agrees to help Alexandris with another problem she’s having.

Someone has someone has embezzled $1.3 billion dollars from her company. But Dez is a gatekeeper – one who opens doors and keeps them open – and this is just a door of another kind. And the door he opens leads to a dangerous conspiracy involving media manipulation, militias, an armed coup, and an attempt to fracture the United States themselves. With the aid of LAPD Detective Swanson and her boss Captain Naomi Cardona, he follows leads, all pointing to a military-type plot stemming from a small town in north central California.

Dez is five-eight but built like a tank, with a barrel chest, thick arms, short, bowed legs, and oversized hands riddled with scarred knuckles. His scars, burns, and bullet wounds paint a road map of the world’s hot spots. His past and training is shrouded in mystery. On the inside of his right forearm is a tattoo of Janus, the two-faced Roman god of doors, gates and transitions, and the patron for duality—life/ death, war / peace, beginning / ending—holding the metaphorical key to doors or gateways between what was and what is to come.

Dez cannot help but pepper his conversation with quips and wisecracks—somewhat shrouding his true guile and mental acuity, He can quote writers and philosophers, yet is an expert at throwing and taking punches. Even as the situation deteriorates into a life or death situation, Dez keeps cool, calm and collected and does what he does best - controls the gate. You will also want to pay close attention to Petra. She's not just a pretty face who Dez tends to want to sleep with...often. She's a powerful woman who refuses to back down easily, especially against her own father and his company.

I actually overlooked several parts of this book due to the insanity of someone actually believing anything that the author comes up with can happen. The author loves his conspiracy theories. He wants to blame everything on certain ripped out of the news groups that the Media and politicians love to label as villains while watching other groups actually burn down cities, chase reporters trying to cover the riots, and attack police officers because they are pigs and they need to be taken out. And you wonder why we have so much crime in this country.

I would not be hesitant in reading any sequel that the author might write about in the future. I think there's more Dez adventures that could be very entertaining.