#Review - Wild is the Witch by Rachel Griffin #YA #Contemporary #Fantasy 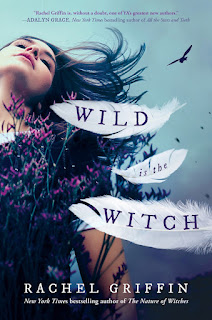 Iris Gray knows witches aren't welcome in most towns. When she was forced to leave her last home after an illegal display of magic, she left behind a father who was no longer willing to start over. And while the Witches' Council was lenient in their punishment, Iris knows they're keeping tabs on her.

Now settled in Washington, Iris she vents her frustrations by writing curses she never intends to cast and spends her days at the wildlife refuge with a witch-hating intern, Pike Adler.

Iris concocts the perfect curse for Pike: one that will turn him into a witch. But just as she's about to dispel it, a bird steals the curse before flying away. If the bird dies, the curse will be unleashed and turn not just Pike, but everyone in the region, into a witch.

Iris begs Pike to help her track the bird, and they set out on a trek through the Pacific Northwest...and find they may like each other's company more than they want to admit.

Wild is the Witch, by author Rachel Griffin, apparently has no ties whatsoever to the authors The Nature of Witches. The story begins two years ago when Iris Gray's best friend Amy Meadows was stripped of her ability to have access to magic because of actions that caused her boyfriends death. Even though Iris was there when it happened, she was found not guilty of having anything to do with Amy's actions. You would think that Iris would have learned her lesson from what happened to her best friend, right?

Two years later, Iris and her mother have moved to the Pacific Northwest leaving her father behind. They now work at a Wildlife Refuge called Foggy Mountain Wildlife Refuge where they where they rehabilitate wildlife. Iris and her mother Isobel have special connection with animals like wolves, cougars, bears, and even Northern spotted owls which are sacred to witches, because they are witches. Iris's problem is that her co-worker has gotten too far under her skin. Pike Adler, her mothers intern, is like that annoying brother who gets under your skin for laughs.

Instead of working out her issues with Pike, she blows a gasket when he makes a comment about hating witches, especially Amy. Iris real issue is that nobody actually believed her innocence when it came to what happened to Amy and her boyfriend. She lost friends, as well as her father who had had enough of being around witches. Remember when I said you would have thought that Iris would have learned from Amy's mistakes and her own participation in what happened? Yeah, no or this would be a relatively short novel.

So, in typical teenaged angst fashion, Iris decides to create a curse on Pike. Iris was trained by her own grandmother to always bury the spell before it could cause problems. But before she can bury the spell, a Northern spotted owl who just happens to be a magical amplifier, flies down and grabs the spell and flies away. If the curse gets out, not only will Pike die, but hundreds of others may as well. Iris and Pike must head into the deep forest to retrieve the owl, but Iris can't share with him how important it is that they bring the owl back.

There is much adventure on the trip and they figure out that they are better together than at each other's throats. Iris learns that Pike knows her better than she knows herself. Iris believes the whole world is her enemy, she is quick to distrust people, and slow to trust, she's doesn't give anyone the benefit of the ought, and is too preoccupied with what might go wrong, instead of enjoying the moment she's living in among the animals that she really loves.

One of the funniest things about this story is that Iris and Pike agree to call the owl MacGuffin. I seriously had no clue what the name meant until I found this. "MacGuffin is an object or device in a movie or a book that serves merely as a trigger for the plot." One could say that the owl itself is not only the trigger, but the reason why Iris and Pike end up growing closer by trial and error, and for Iris to start leaving the past in the past, and look forward to the future, and for Pike to understand there's more to life than his hatred of something that happened in the past.

The best part about the book was the justification of the existence of magic. Iris is a Lunar which means her magic works most on animals. There are two other types, namely, Stellars whose magic work strongest on humans and Solars whose magic gravitates towards plants. Magic here isn’t all powerful. It needs to work in combination with science to actually make things work. So a stellar might reduce the physical pain of humans by using magic, but cannot heal them unless they’re working together with a doctor.

The issue I have about this story is that we really don't get any background before the author is dumping a whole lot of information on us quickly. We have no clue what really happened between Amy and her boyfriend and what, if any, part Iris played since it appears as though she is more powerful than readers are lead to believe.