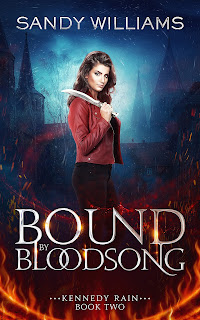 Tragedy forces Kennedy back to The Rain Hotel, a magic-free haven for vampires and werewolves and all things other. She might have been reluctant to return to her ancestral home, but now that she’s running things, she will use all her resources to discover who betrayed her family and why.

As the clues pile up and evil forces threaten Kennedy and her friends, three powerful individuals compete for her trust. But things aren’t what they seem, and each man has ulterior motives. She’ll need to build strong walls against their magic and manipulations, and she’ll especially need to be cautious around one charismatic werewolf who seems determined to tempt her into his bed.

Can Kennedy unravel the mystery and find her place in the paranormal world? Or will her decisions lead to The Rain’s destruction and the loss of innocent lives?

Bound by Bloodsong is the second installment in author Sandy Williams Kennedy Rain series. When Kennedy was 18, she turned away from her family business and decided to live a normal life. But a normal life also included helping paranormals who owe no loyalties to either Arcuro, the vampire caretaker, or Lehr, the werewolf Alpha. After learning about her parents murder by unknown paranormals, Kennedy has taken a stand against the werewolves and vampires.

She has chosen not to allow any paranormal on her property called The Rain during Turnover until those responsible for her parents murder are found. Kennedy feels the werewolves are behind the murder and demands that Blake either help her, or get the hell out of her way. Blake can be a bit on the clingy side when it comes to Kennedy but I think he means well. Things change when an evil enemy who wants access to the Treaty becomes a major threat. Kennedy is also determined to keep her human roommate friends safe, as they never knew about the hotel.

She’ll need to build strong walls against their magic and manipulations, especially by Blake, Arcuro, and Lehr. What makes the Rain Hotel unique you ask? Excellent question! The hotel is a null zone for paranormals, with a treaty that has been in effect for hundreds of years; a place to recover, be at peace, or just time to relax with no pressure. A werewolf can avoid the full moon or a vampire can see the sun, or recover from an injury.

Plus, some other unknown species like Sullens, Pehdra, and Thords have signed a contract to work for the hotel for 5 years. It also includes Jared, a vampire who used to be Arcuro's second in command after he fell in love with Nora, a werewolf. The treaty is also supposed to protect the Rains, but for some reason or the other, someone found a way to get around the treaty to kill her parents. We also get the return of Astrid, a witch who disappeared with her mother over 10 years ago, and may hold answers to what happened to Kennedy's parents.

This story really is twisted. The story moves from The Rain to Cincinnati, and a wild action packed scene where Kennedy and Astrid and friends try to lure those responsible for her parents murder. One could say that this story ends on a cliffhanger since Kennedy has all but declared war on both vampires and werewolves, and it's only a matter of time before that conflict comes to a head one way or the other.