#Review - The Curse of the Blessed by C. Tarkington #YA #Fantasy 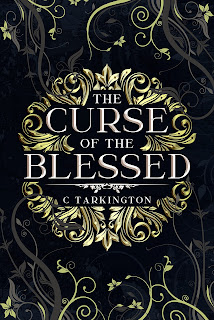 Lady Maela Llewelyn loves her family and her land. Every year she sees her people growing weaker and sicker as the kingdom demands more and more resources from them. All the while, she hides inside her a magical power in fear she will be taken away by the High Holy Council.

After saving a young girl working in one of the orchards, she is seen using her power by her uncle, who sits on the High Holy Councile and other priests with him. Her uncle convinces her to go to the palace to participate in an event meant to find the crown prince’s bride and the next queen of the kingdom. Mae has no desire to wed the prince, but she sees a chance to speak to the king about her land’s problems and train with her mystical powers.

She travels with her uncle to the palace, where many look down on her because of where she comes from. She befriends the young highest lord of the city and finds herself often in the company of the prince. As she tries to focus on helping her people, she begins to see she is in the middle of more intrigue than she could have imagined.

The Curse of the Blessed, by author C. Tarkington, is apparently the first installment in the authors The Curse of the Blessed series. The story is told in the third person narrative featuring Lady Maela Llewelyn. Mae comes from a place called Adaria where the country of Gelardia gets all it's produce and lumber from as well as livestock. Maela doesn't think much of the magic that flows in her veins. In fact, she calls it the curse and tries hard not to use it so that others don't take her away from her mother and younger brother.

This is a country where magic was in everything and many were born with magical abilites thanks to the Goddess Auralia until it seemed to fade into obscurity. Thanks to misogynistic laws, her brother of 3 years of age is considered the heir while Mae tries to pick up where her father left off in helping make sure her people can feed themselves. Mae's life is turned upside down when she saves a girl from falling out of a tree. Her Uncle, a High Priest of the Temple of Auralia, as well as several priests watched with gleeful gleams in their eyes.

Why? Because the Crown Prince of Gelardia, Prince Cadel is about to turn 18 and he will be expected to find a wife to carry on the Callages legacy. Over the past 400 years, magic has been disappearing, but those with a bit of wealth are finding themselves with a variety of magical ability. Usually it is someone from the Gold Row or wealthy people, but this year's contest will feature girls from throughout the land. So, Mae, along with a variety of other young women like Olivia, & Leanna, who she befriends as well as teased non-stop, all travel to the palace where they will be tested, watched, and sorted until only one young woman is left standing.

One could say that Mae is brash and hot-headed. She knows that this game comes with a high cost for those who don't end up being chosen to become betrothed to the Prince and eventually become the next Queen. She knows that the Highest One seems to have an agenda of his own; one that would see Mae be part of some diabolical plan to remove the King and the Prince from power. Of course, there's the usual snarky commentary from those like Henrietta who honestly believes that she is the only one who should be standing when all is aid and done.

Mae has no desire to wed the prince, but she sees a chance to speak to King Mascen about her land’s problems and train with her powers. After all, her little country is the one that is keeping Gelardia going for a very long time with nothing seemingly going to end any time soon. Mae is likely the most powerful candidate with magic that the Kingdom has seen in a very long time, but she also has to protect her heart from her best friend Felix who refuses to go home, the Prince himself who tries to warn her about dangerous at the Palace, as well as Lord Aimon who seems to be everywhere she goes, and makes it impossible not to call this a twisted 4-way love triangle.

I picked up this book because, honestly, the title and the cover. I was looking for a quick book to read to fit in before I will shut down for Hurricane Ian. I will likely keep an eye out for when the alleged sequel will be released since there are way too many questions left unanswered and we probably should.

NOTE:  If you are reading this, and you are in Florida, I pray that everyone who been told to evacuate has done so. Please don't play with your life or the life or your loved ones, or that of your pets. Ian is a bastard with zero feelings about your feelings. As I live in Jacksonville, I am going to stay where I am and batten down the hatches, as it were. I am in a place where normally we get a whole lot of wind, and a whole lot or rain, and we will likely lose power for a few days unless Ian passes by quickly.