#Review - A Curse of Queens by Amanda Bouchet #Fantasy #Romance 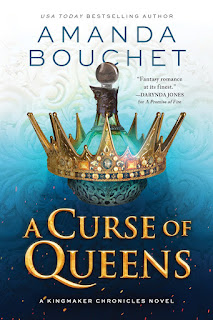 A Curse of Queens, by author Amanda Bouchet, is the Fourth installment in the authors The Kingmakers Chronicles. I highly recommend that you read the first trilogy of this series to understand the past events that has finally united Thalyria under the rule of Cat and Griffin and the world the author has created. As we learned from the first trilogy, this world is steeped in Greek Mythology with plenty of Gods and Goddesses appearing through the course of the story. The Kingdom needs Cat and Griffin's promised child or the promises they made will be for nothing.

But someone (no spoilers) has given Cat the Elixir of Eternal Life which means that she will not grow old and neither will her baby Eleni, the child who is supposed to bring change to the world. This book takes place at 4 full moons after the unification of the realm. It features Jocasta, the youngest sister of Griffin, who if you've read Heart of Fire, you know that she was part of Team Alpha along with Flynn of Sintra, her lifelong friend and captain of the guard. The good thing about this book, is that it not only features dual POV's, but they are done in the third person.

When the Gods are non-existent in the struggle to find a cure, especially Persephone, Jocasta strives for a cure herself. Combing through tons of material, and relying on her own healing skills and knowledge of herbs with forgotten knowledge, she is determined to find a path forward. In the end, it means a Quest to find the legendary island of Circe along with Bellanca, Flynn, Carter, and Prometheus. Along the way, Jocasta and Team Elpis must deal with several difficult challenges without losing anyone and themselves to find Circe and the cure for Cat.

They will realize that an Olympianomachy is being fought and Thalyria is the testing grounds for allegiances within the Dodecathlon. While Zeus, who Cat is descended from, has been hard at work crafting this destiny for Thalyria for generations, another Olympian (no spoilers) has decided to step in to foul up his plans. Team Elpis finds themselves pitted against Gorgons, and Pan as well as Circe. While some Gods and Goddesses do appear like Persephone, Poseidon, and Athena, the rest are gone.

Readers were once teased about Jocasta and Flynn's interest in each other, and now we can finally put that to rest thanks to a flashback 6 years ago to a moment that will live in heartbreak for Jocasta and a quest that binds them together forever. As I was wrapping up this story, several things became abundantly clear. The author apparently has chosen to continue this series, and the next book may or may not feature Carter and Bellanca who are light fire and gasoline whenever they are together. I am perfectly fine with this decision.