#Review - Rise of a Phoenix by Shannon Mayer #Fantasy 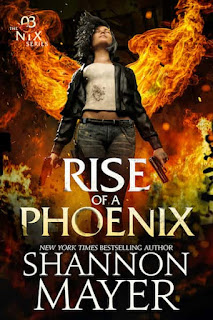 To save my son, I would give up my soul. To survive this journey and stop those who face us I may have to do just that.

My son is waiting for me to bring him home, to rescue him from the horrors he’s faced on his own. I won’t take the chance I will find him only to fail him again. Which means I must unearth a way to kill his captor, a man who is immortal. A man who made a deal with the devil to attain his power. As it stands there is only one way to end that monster’s life. A way that is far from simple.

With a pair of guns strapped to my hips, and an ally at my side, I will finally face down the evil that created me, crossing the world to do so.

I can feel death stalking us, waiting for us to slip up. But I am no stranger to death, and I will face him too if I must to save my boy.

To bring him home.

Rise of a Phoenix is the third installment in author Shannon Mayer's Nix series. Nix has once again lost her son, Bear, who she thought died in a car crash to her father, Luca Romano, who made a deal with a Devil for immortality. The good news is that she discovered that she is an Ascendant who has had her abilities hidden by her natural ability of killing. She now has the temporary ability to absorb abnormals abilities. She also seems to grow much stronger with each threat that she faces with is exactly what Romano wants from her.

He truly believes that he can use Nix and Bear as his personal guardians against the Demon he made a blood oath with. Other good was thanks to Mancini she found her sister Bianca's missing diary which may explain why she's named Phoenix. She learns a secret about her guns Eleanor and Dinah and the souls that were put inside, all the while trying to figure out why Mancini is so willing to help her defeat Romano, and other stunning secrets that will find Nix going from one battle to the next in order to find a way to take down her father for good.

This book also features Bear from the point where he basically betrays his mother to keep her safe, to their eventual reunion later on in the story. Bear has come into his own as well. There's a whole lot of stuff that happens to Bear on his journey to reunited with his mother that includes Nix brother Tommy who also has a goal of killing Romano. This journey includes some pretty stunning revelations regarding his own powers that may rival his mothers and what happened to his father.

One of the more curious aspects of this story was Nix's relationship with Killian and Killian's families dynamics which make them an ideal fit. Killian doesn't have to go with her to face death, but he will do anything to help her get Bear back including going to Hell and back. It is fair to say that I have been trying to avoid spoilers. When this book was released, it claimed it was the final chapter in the series. Now I find out that there are two more books to read before the real ending. I will say that the ending of this story is wild. While the action in the story is ongoing, the character storyline changes will surprise you right until the final word.