#Review - Fortress of Snow by Melanie Dickerson #Romance #Historical #YA 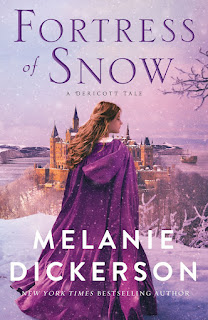 Mazy dreams of independence. Sir Berenger longs to play the hero. But in each other, they may find the secret to happily ever after.

Mazelina of Wexcombe has always dreamed of traveling with her father to lands beyond the confining walls of their castle. But his sudden death deprives her of the future she imagined. Abandoned by her eldest brother, Mazy is soon forced to seek help from her beloved brother Sir John at the great estate of Strachleigh.

Her visit leads to a friendship with the dashing and noble Sir Berenger of Dericott. He has notions of rescuing a damsel in distress. But Mazy is brave enough to defend herself—and has proven that her skills in archery and knife throwing rival that of a knight’s. So when he is called away to Prussian lands, Sir Berenger looks to distinguish himself in battle.

When Sir Berenger returns, he and Mazy meet again on the streets of London, where she is making a living selling goods in the market. Meanwhile, he has been summoned by the king to receive a reward for his service. But the recognition comes with a price: He must marry a wealthy, titled widow to please the king. But when Mazy begins to suspect treachery, she embarks on a journey to the fortress of snow to warn the brave knight—and secure her own fairy-tale ending.

Fortress of Snow, by author Melanie Dickerson, is the fourth installment in the authors Dericott series. This story allegedly is the reimagining of the Snow Queen tale. The story beings in the year 1383, but jumps ahead several years to 1385. After Mazelina of Wexcombe loses her beloved father, who she was very close to and had plans to travel beyond the walls of her castle, her world seemingly comes to an end. Her half brother Warin inherits her fathers castle, and he's eager to dump Mazy on someone much, much older than she is.
When her brother Sir John transfers to London to work for the King Richard, Mazy makes her way to London and is summarily dismissed by both Warin and John for traveling alone thus destroying her reputation. John treats her like something you might step in if you had a dog who you allow to take care of his business in your backyard. But she does seem to have a friend in Sir Berenger, as well as his sister Lady Delia who you would have met in the first installment in this series.
Mazy finds a friend in Roesia (Ro) Sadler who helps her find housing, as well as helping with Mazy's idea of selling bread on the market. Mazy isn't a Mary Sue. She knows archery, she knows tracking, and hunting, and she carries knives to protect herself from anyone trying to harm her. For 2 years, Mazy pretty much does what she needs to do to survive. She's made friends among the downtrodden, as well as women who have been widowed. She doesn't hesitate to call out her brother for his abandonment of her, yet there is one man who seems almost too good.
Sir Berenger of Dericott is Lady Delia's brother, one of 7 who was charged with treason, sent to the Tower of London, but was found innocent of all charges thanks to the efforts of Delia and her now husband, Sir Geoffrey. With orders from King Richard, Berenger travels to Prussia where he will spend the next 2 years fighting against Teutonic Knights. When he gets back, Richard offers him a token of his appreciation and that comes with a marriage opportunity for a woman who was recently widowed: Lady Catherine aka Lady Bristow.
Berenger knows that he can't say no to Richard. He knows that Richard wants loyalty from everyone around him, including the man who he just made Captain of his Guards. So, Berenger travels with Lady Catherine to Bristow. When something feels off about the lady in question, Berenger decides to hang around and see what is really happening here, and if he can save a young girl named Juliana who seems to be scared to death of Catherine.
Mazy soon learns that the Lady Bristow is a Black Widow from her brother. The more Mazy learns, the more she realizes that she must travel to help Berenger before he is caught up in a trap that will only lead to bad things happening to him, as well as the young girl, Juliana. This book ends as predictably as one might expect if you've read the rest of this series. There is very clean aspects of a romance that quickly grows between the couple. This book can be read as a standalone, yet characters from previous books always seem to make an appearance like Delia.