#Review - A Hard Day for a Hangover by Darynda Jones #Mystery 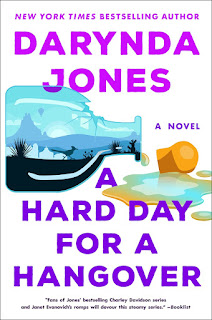 Some people greet the day with open arms. Sheriff Sunshine Vicram would rather give it a hearty shove and get back into bed, because there’s just too much going on right now. There’s a series of women going missing, and Sunny feels powerless to stop it. There’s her persistent and awesomely-rebellious daughter Auri, who’s out to single-handedly become Del Sol’s youngest and fiercest investigator. And then there’s drama with Levi Ravinder—the guy she’s loved and lusted after for years. The guy who might just be her one and only. The guy who comes from a family of disingenuous vipers looking to oust him—and Sunshine—for good.

Like we said, the new day can take a hike.

The blockbuster conclusion to the bestselling Sunshine Vicram trilogy, A Hard Day for a Hangover will have readers laughing and cheering to the very last page.

A Hard Day for a Hangover, by author Darynda Jones, is the third, and final installment in the authors Sunshine Vicram's trilogy. Let me start out by saying that I encourage folks to please read A Good Day for Chardonnay first before jumping this book. There was an event that happened in the final chapter that has lasting implications for things that are going to take place in this story. Del Sol, New Mexico's Sheriff Sunshine Vicram day begins with a massive hangover from way too much tequila which ties into what I just said.

From there, things get worse. A hunter spots a seriously injured and sexually assaulted young girl at Copper Canyon. The girl is barely alive when she is rescued and taken to hospital. As Sun awaits news at the hospital, a prisoner suffering from a heart attack is brought in, only for chaos to ensue when he manages to escape. He is no stranger to Sun, it is Wynn Ravinder, she had been responsible for facilitating his move to the local prison. Of course, a certain US Marshal arrives just in time to tell Sun that she is going to be investigated for her role in his escape.

To make things worse, her Deputy Quince Cooper now wants to put Levi Ravinder in the back of his squad car after Levi did something funny, and Levi is trying to avoid Clay Ravinder who is out to kill him and take over his business. Thankfully, along with Cooper, Sunny has Tricia Salazar, Sniper Zee, Poetry Rojas with his super power of recognizing those have spent time in prison and her newest recruit, Keith Seabright, who has now in the process of settling in the area. Too bad the Dangerous women and Sinister sons have to get involved.

Then comes the real meat of this story. Meanwhile, Sunshine’s 15-year old daughter Auri, who apparently wants to go to the FBI, becomes aware of a missing girl who possibly may have been en route to the area. Could Jane Doe be the missing woman? And if so, who put her there? Auri and her best friend Sybil, who has already seen way too much, decide that yes, they are going to ignore Sunny's warnings and charge ahead. Auri reminds me of Cookie's daugher Amber from the Charley Davidson series. Auri also has to deal with her friend Cruz de los Santos who was hurt badly saving her life. Cruz and Auri are wonderful together.

And, of course, we can't ignore Sunny's frustration when it comes to Levi Ravinder and what really happened to her 16 years ago that caused her to leave Del Sol and ended up in Santa Fe where she would eventually become a Detective before a certain group of people helped her to become Sheriff of Del Sol. ::slight spoiler:: Levi has known about what happened to Sunny for years, and even knows about Auri, but now it is time for not only he, but the rest of us to learn as well even though we got a bit of an awakening at the end of the previous installment.

It's always sad when a series comes to an ending. But I have no regrets when it comes to reading this series, or finishing this book so that I could find out whether or not all the loose ends would be wrapped up. Jones once again does an excellent job of balancing the light-hearted humor with darker, more suspenseful scenes which sees a real life scene that probably wasn't necessary but likely put in to send a message to gun owners. The result is a page-turner that is both laugh-out-loud funny and compulsively readable.