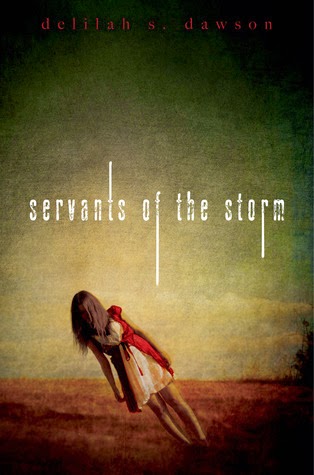 **I received this book from Edelweiss / Simon Pulse in exchange for an honest review. This does not affect my opinion of the book or the content of my review.**

A year ago Hurricane Josephine swept through Savannah, Georgia, leaving behind nothing but death and destruction — and taking the life of Dovey's best friend, Carly. Since that night, Dovey has been in a medicated haze, numb to everything around her. But recently she's started to believe she's seeing things that can't be real ... including Carly at their favorite cafe. Determined to learn the truth, Dovey stops taking her pills. And the world that opens up to her is unlike anything she could have imagined. As Dovey slips deeper into the shadowy corners of Savannah — where the dark and horrifying secrets lurk — she learns that the storm that destroyed her city and stole her friend was much more than a force of nature. And now the sinister beings truly responsible are out to finish what they started.Dovey's running out of time and torn between two paths. Will she trust her childhood friend Baker, who can't see the threatening darkness but promises to never give up on Dovey and Carly? Or will she plot with the sexy stranger, Isaac, who offers all the answers — for a price? Soon Dovey realizes that the danger closing in has little to do with Carly ... and everything to do with Dovey herself.

On the day that Hurricane Josephine came to Savannah, Georgia, it devastated the city, and took an exorbitant toll on the population. Families were torn apart, parts of Savannah won't ever be the same again, and a darkness quietly waltzed into to town, taking up roots, and changing the overall landscape without anyone noticing.

For Seventeen year old Billie Dove (Dovey) Greenwoood, Josephine was just background noise to the fact that she watched as her best friend, Carly Ray, was taken away by the storm. She's spent the past year in a drug induced numbness thanks to several episodes that made people believe that she had lost her hold on reality. Some reviewers have already spoiled, or mentioned Dovey's episodes, so I won't do so here.

This all changes after Dovey sees Carly at their favorite coffee shop, and proceeds to stop taking her pills so she can discover the truth. This leads Dovey down a dangerous and deadly path that won't end until her eyes are completely opened. What really happened to Carly, and who she can really trust when a large part of her memories have vanished into a dark hole, and her parents don't seem to care?

For me, Dovey is a character that you really had to withhold commentary on until you found out where Dawson is taking the story, and why, or whether or not there will be a follow up book. Whenever you have a character who has lost memories, that character becomes a questionable source of information for the reader. How can we really trust what she is telling us, when she's spent the past year taking pills that made her lose interest in everything that she enjoyed? It's even worse when she has to rely on people who know more about Dovey's past year, than she does, and these people may or may not have her best interests at heart.

If you want a good view of who Dovey really is, then you have to look at the good, along with the bad. It's poetic that she actually believes she can find out the truth about Carly while shifting through treacherous territory and not letting her parents know that she's off her meds. Then you have the fact that she stumbles and bumbles around catching the eyes of those who hold the key to Carly's fate, while also attempting to unlock her own lost memories, and why she is able to see things nobody else can.

Without giving away any spoilers, Dovey finds an interesting partner in Isaac. So much so, that you can't really get around the fact that he may or may not be a trustworthy character. Are we really to presume that he has Dovey's best interests at heart, or is he another piece of the twisted game that is being played out under the cover of darkness and mind numbing pills? Are we to absolutely trust Dovey's reality when Dawson twists her ending in such a way that we end up questioning everything?

I loathe 3 way love triangles. I am sure you all know this by now by reading my reviews. But, I can't help but to ask why YA novels feel it necessary to combine this with a story that is already semi-discombobulated? Thanks to Dovey's memory lapses, and a friendship with Baker that turns into a virtual game of name calling and he-man antics with Isaac over her affection, perhaps it would have been better to leave that part out of this story and focus on "other" things.

Servants of the Storm is an entertaining and twisted story that reveals a whole slew of paranormal creatures that live right alongside Savannah's population. This from the same writer who created Criminy Stain, Blud bunnies, and other strange creatures that live in an alternative reality. But, the ending of Servants of the Storm has left me totally confused, and demanding answers to LOTS of different questions. I am still trying to get a handle on the fact that apparently the next book in the series is in the hands of the readers. It's one of those, buy this book now, or there won't be another kind of situations.