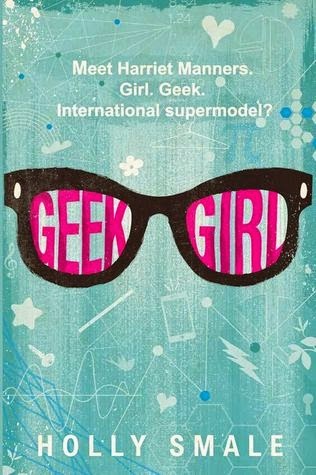 Geek + runway = a hilarious runaway hit! This bestselling UK debut is full of humor and high-fashion hijinks—and now it’s coming to America.Harriet Manners is tired of being labeled a geek. So when she’s discovered by a modeling agent, she seizes the chance to reinvent herself. There’s only one problem: Harriet is the definition of awkward. Does she have what it takes to transform from geek to chic?Geek Girl is the first book in a hilarious new trilogy. It was also the #1 bestselling YA debut of 2013 in the UK, where it was shortlisted for the Roald Dahl Funny Prize and won the Waterstones Children’s Book Prize for Best Book for Teens. With all the humor and fabulous shenanigans of Louise Rennison’s Confessions of Georgia Nicolson and Meg Cabot’s The Princess Diaries, Geek Girl is about to become an international superstar.

15-year old Harriet Manners is the very meaning of the word Geek "a peculiar person, especially one who is perceived to be overly intellectual, unfashionable, or socially awkward." Harriet only has one true friend in (Natalie Grey) while having her own stalker (Toby Pilgrim) and her own mean girl (Alexa Roberts) who makes her life at school nearly unbearable.

On a trip to Birmingham, Harriet literally stumbles into a Fashion photographer from a major label who is looking for someone different. Different is exactly what Harriet is. She has no fashion sense whatsoever unlike Natalie, and if she could, she would wear her spider costume from the previous years Halloween! When Harriet gets upset, she hides under tables. Harriet makes a very brave choice in trying to become a model and trying changing the way people think about her.

Wow, so I haven't had this much fun reading a book in a very long time. Smale really has a sense of humor while adding a bit of seriousness to keep the story from losing its direction. Sometimes I think the British have more of a sense of humor than most Americans. After all, this is the same country that gave us Benny Hill!

I adored Harriet and her parents Annabel and Richard who are just as quirky as she is. I liked the funny look into the fashion industry which allows Harriet to meet her first true boyfriend in Nick, who apparently is the hottest model in London at the moment. I liked that Smale didn't go full bore on the romance angle, but left it up for more exploration in the next installment.

I loved Harriet's inner dialogue. She has so much snark and humorous comments and some crazy awkward moments that I couldn't help but laughing like a drunken hyena. I will be reading the next installment, Model Misfit, whenever it is released in the US to see if Smale can keep up the magic. Geek Girl was first published in 2003, but this is apparently the first time it has been released in the states.

**I received this book for free from (Harper Teen) via (Edelweiss) in exchange for an honest review. Thank you!! This does not affect my opinion of the book or the content of my review.**

Email ThisBlogThis!Share to TwitterShare to FacebookShare to Pinterest
Labels: Contemporary YA, Young Adult