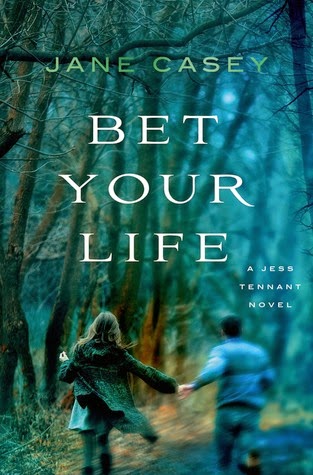 Jess Tennant has now been living in a tiny town on the English seaside for three months, and is just beginning to relax and think of it as home after the traumatic events of last summer. But in the small hours of Halloween night, a teenage boy is left for dead by the side of the road. Seb Dawson has a serious head injury and may not survive. Jess might not have liked Seb much, but surely he didn’t deserve this. The police don’t seem to be taking the attack very seriously, but Jess can’t just let it go, and she takes matters into her own hands.As she investigates, Jess discovers that Seb was involved in some very dangerous games. A secret predator around girls, he would do whatever it took to abuse them, from lying and blackmail to spiking drinks. Could a group of vengeful victims be behind his attack? Or is there someone else with a grudge against Seb, who will stop at nothing to silence him? Jane Casey returns with another edge-of-your-seat mystery in Bet Your Life.

Since we last left Jessica "Jess" Tennant at the end of How To Fall, she's been living quietly in the small English town called Port Sentinel. Jess still doesn't quite fit in, has no friends, no boyfriend, and feels like a polar bear set loose in the Florida Everglades. Her mother Molly, on the other hand, has found a job at a gallery, but is being stalked by her ex-boyfriend and the father of Jess's ex-boyfriend Will.

If you haven't read How To Fall, then you wouldn't know that once Jess has a bone in her mouth, she refuses to let go of it until the mystery is solved. It is how she ended up solving her cousins murder, and it's why she now has a reputation around town. But, will it be good enough to solve the case of Sebastian Dawson who was left to die in the middle of the road?

Sebastian is about the most unlikable "victim" you can find. With witnesses showing absolutely no regret or emotion for what happened to him, can Jess look Seb's sister Beth in the eye and tell her the truth about what really happened to her brother and why? Can Jess survive long enough to see an innocent man freed? Will local police inspector Dan Henderson once again squash her investigation because he feels honor bound to protect because of his love for her mother?

While the mystery was stretched out until the last possible moment, the triangle of doom, I am now calling it, once again takes up a large portion of the story. In reality, I can say that I don't blame Jess for her emotional flip flop. I mean, just take a look at her mothers past, and then try to say that Jess shouldn't try to discover her own happiness even if it means testing out the merchandise before buying it. Jess really can't go wrong with either Will Henderson, or Ryan Denton. I just hope it doesn't drag along like some zombie chasing after its next meal.

I have to say that Jess's mother is an absolute train wreck with an ex-boyfriend, ex-husband, and new employer all making plays for her. She continues to brush off Jess's concerns, but that just shows lack of character. I think I've said this before, but If Molly ends up with Dan, I sincerely hope Jessica moves out, and finds a way back to her friends in London. I don't that think ignoring your daughters feelings on the issue of what is going on, is anyway to raise a child. I also don't think that being "friends" with the father of the boy your daughter might feel a connection to, shows good taste.

Apparently, this series is being released ahead of the US, and to say I am not shocked, is pretty adult of me to say. I do believe that ALL publishers should release their books simultaneously around the globe. That way, you cut down on the possibility of spoilers, and we don't have to wait a full year for the next book to come out!

There is a third book called Hide and Seek (Jess Tennant #3) which supposedly releases in the US by St. Martins August, 25, 2015. Will Jess and Will be together? Will Jess once again charge the rhino (death) with only her sarcasm and whit for weapons? Stay tuned!

**I received this book for free from (St. Martin's Griffin) in exchange for an honest review. Thank you!! This does not affect my opinion of the book or the content of my review.**