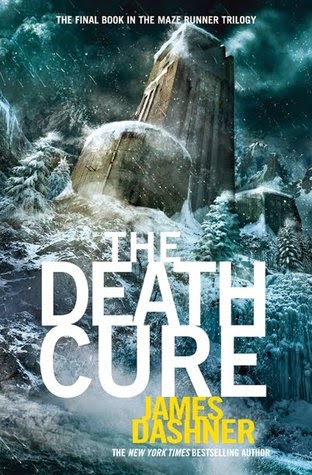 It’s the end of the line.

WICKED has taken everything from Thomas: his life, his memories, and now his only friends—the Gladers. But it’s finally over. The trials are complete, after one final test.

What WICKED doesn’t know is that Thomas remembers far more than they think. And it’s enough to prove that he can’t believe a word of what they say.

The truth will be terrifying.

Thomas beat the Maze. He survived the Scorch. He’ll risk anything to save his friends. But the truth might be what ends it all.

The time for lies is over.

The Death Cure is the final installment in the Maze Runner series. Picking up where The Scorch Trials left off, Thomas once again finds himself with his back up against the wall. Told that he has the Flare, a deadly disease that drives humans into becoming mindless Cranks, he spends a bit of time in confinement and away from his Glade friends Newt, and Minho.

Rat Man aka Assistant Director Janson, once again makes an appearance, and this time it's because the trials are supposedly over, and WICKED intends on giving everyone back their memories. While Teresa, who I still haven't forgiven for her actions in The Scorch Trials, and others agree, Thomas is a hold out. Why shouldn't he be? He's uncovered the real truth behind Wicked. He knows that he, and the others are a pawns in a supposed path to the cure for the Flare. He's sick of taking orders, and just wants to live without all the experiments, or knowledge of what he helped create. He's also Immune to the Flare, while some of his friends are already infected.

This is the point in the series where Dashner throws out all his secrets, twists and more shocking deaths. Now is the point where all the cards are on the table for everyone to see. Or, are they? Are the trials really over, or is WICKED up to no good once again? Will there be further betrayals that left loyalties and friendships hanging by a thread? Why is Thomas so intriguing that WICKED focuses a whole lot of attention on him? Are there any safe places left in the world? Who is the mysterious Chancellor Ava Paige?

This is the point where no matter how you feel about certain characters and what they did in the Scorch Trials or even the Maze Runner, you almost have to feel a bit of loss for them when something awful happens. I think this final story was a bit over the top, especially what constantly happens to Thomas. Everything relies on Thomas, yet you would think he would finally get it through his thick head that nobody can be trusted. So many times over this series, Thomas has found himself injured or nearly dying. What was the point, exactly of this kind of torture? Oh, yes, I forget, he's the.........SPOILER!!! ONE

Some of my more glaring complaints about this story comes from the ending, the re-appearance of a character from the Maze Runner, the loss of two of Thomas's friends. We are also supposed to believe that Brenda has all her secrets out in the open and hasn't been trying to work against Thomas and his friends. Apparently, I was correct in my assumption that Brenda would be a key player in Thomas's struggles and his future. I just didn't know how far Dashner would take her storyline.