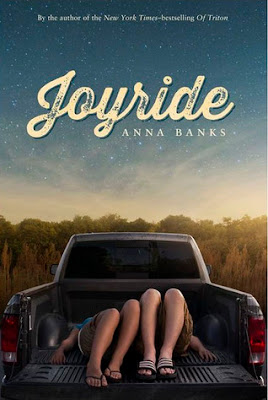 A popular guy and a shy girl with a secret become unlikely accomplices for midnight pranking, and are soon in over their heads—with the law and with each other—in this sparkling standalone from NYT-bestselling author Anna Banks.It’s been years since Carly Vega’s parents were deported. She lives with her brother, studies hard, and works at a convenience store to contribute to getting her parents back from Mexico.Arden Moss used to be the star quarterback at school. He dated popular blondes and had fun with his older sister, Amber. But now Amber’s dead, and Arden blames his father, the town sheriff who wouldn’t acknowledge Amber's mental illness. Arden refuses to fulfill whatever his conservative father expects.All Carly wants is to stay under the radar and do what her family expects. All Arden wants is to NOT do what his family expects. When their paths cross, they each realize they’ve been living according to others. Carly and Arden’s journey toward their true hearts—and one another—is funny, romantic, and sometimes harsh.

Joyride is a standalone novel that features 16-year old Carlotta "Carly" Vega, and 17-year old Arden Moss. The story is told in alternating narratives. Carly in the first person, Arden in the third. This is a story that takes place in Florida where the author calls home. It is a story that touches on two very politically and socially important subjects: Illegal immigration, and human trafficking. I dare say the author has her own opinion on these subjects, and perhaps we can agree that there needs to be further discussions, and less boisterous bluster on what needs to be done.

I really did feel for Carly. Her parents are illegals. They came to this country and didn't bother to apply for citizenship, or getting a license, or insurance to protect their family from things that could tear a family apart. In this instance, it backfires when one of the parents gets into an accident and they are deported back to Mexico. Carly and her brother Julio are forced to work their assess off in order to pay a human trafficker enough money to return them to the US. Carly goes to school and studies hard, while also working at a convenience story to save money. She truly believes that the harder she works, the more likely it is that she will get into a good college.

There's a whole lot to be said about that last part. It is the parents' responsibility to raise, and protect their children. Not the other way around. I can see if the parents suddenly got really sick, and then the kids stepped up and took care of them. I can't imagine anyone paying a Coyote thousands of dollars to trudge through the desert in order to cross the US border illegally. There has got to be a better and safer way for immigrants to come to this country. Here again is where the discussion veers off track during political and social conversations.

On the other side of the coin is Arden. Arden has everything that Carly wants, except for the fact that his father, the Sheriff, is a major tool, hot head, and many, many other things you can say about him. Arden lives to do crazy pranks while breezing through high school without a care in the world. Not since his sister and fellow prankster died has he truly cared about anything important. Carly and Arden meet after he plays a prank on someone where she works, and in a surprising move, she finds out that he's not at all like his reputation. In the end, the two become friends, Robin Hood and Will Scarlet pranksters, and end up finding more in common than not.

I did have a minor problem with the use of the word slavery. Carly truly believes she is a slave to the man in order to make enough money to bring her parents back to America. Perhaps that is true, but the image of slavery is not really the idea thing to be thinking about in today's politically incorrect environment where everything you say and do is being torn apart and put under a microscope. Perhaps it was the authors intention to make you think about how hard people really work, and how little they are able to show for the work they put in.

**I received this book for free from Feiwel & Friends in exchange for an honest review. This does not affect my opinion of the book or the content of my review.**