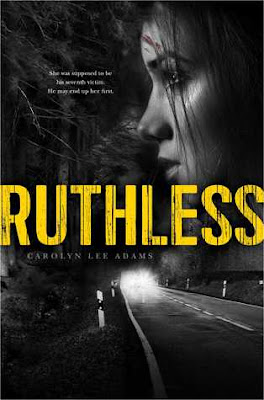 A spine-tingling debut about the ultimate game of cat-and-mouse in reverse as a teen struggles to retain hope—and her sanity—while on the run from a cunning and determined killer.

Ruth Carver has always competed like her life depends on it. Ambitious. Tough. Maybe even mean. It’s no wonder people call her Ruthless.

When she wakes up with a concussion in the bed of a moving pickup truck, she realizes she has been entered into a contest she can’t afford to lose.

At a remote, rotting cabin deep in the Blue Ridge Mountains, Ruth’s blindfold comes off and she comes face-to-face with her captor. A man who believes his mission is to punish bad girls like Ruth. A man who has done this six times before.

The other girls were never heard from again, but Ruth won’t go down easy. She escapes into the wilderness, but her hunter is close at her heels. That’s when the real battle begins. That’s when Ruth must decides just how far she’ll go in order to survive.

Back home, they called her Ruthless. They had no idea just how right they were.

“I am Ruthless, and I’m no one to be trifled with.”

Ruthless is author Carolyn Lee Adams debut novel. It is a story that is brutal, as it is heartbreaking. 17-year old Ruth Carver wakes up in the back of a truck covered with straw and manure and a concussion from being knocked unconscious. She soon discovers a man she calls the Wolfman has kidnapped her to punish her for being a bad little girl and plans to kill her like he has a half dozen other so called bad girls. Over a period of 5 grueling days, a majority of it with a concussion and without any clothes, Ruth discovers her inner conviction, and a little bit of courage to fight off the Wolfman who really doesn't like arrogant red headed girls.

Ruthless is a cat and mouse game between Ruth and her kidnapper who is nearly as relentless in his desire to make Ruth pay for her arrogance and the way she treats people. There are some basic similarities between the two characters, but I'll let you read the book and figure them out. The story flip flops around a bit from Ruth's point of view, to the kidnappers, to some background information that is necessary for readers to understand who Ruth really is, and why we should really care about what happens to her. After all, there are moments where Ruth is anything but a likable character and you can truly understand why someone would hate her so much. But, the story isn't so much about who Ruth is, or what she's done to supposedly deserve being kidnapped.

That is, after all, exactly what the kidnapper expects Ruth to do. Break down, and feel sorry for her previous actions, and repent for her sins. The kidnapper never expects that Ruth would be so strong willed to the point where she struggles to find a way back to civilization and her family. I actually found one scene pretty horrific, and it had nothing to do with the kidnapper. Imagine, if you will, someone knocks on your door. The girl is terrified, naked, and pleading with you to call the police. What would you do? Me, I would immediately call the police and perhaps offer a blanket. Not unlike NYC in the early 80/90's, people in this book have a way of pretending that things are perfectly fine. They have a way of turning away people who desperately needs their help.

It is nearly impossible for me to put myself in Ruth's position. I would most likely die within 24 hours after being taken. But, having had military training, I would at least try to escape and not allow myself to be raped again. I would do exactly what Ruth does, fight back with everything I have left, and if I die while taking a piece of the kidnapper with me, so be it. So, my one unhappiness with this book is the ending. I do wish it had been totally different. Perhaps I am a bit blood thirsty, but Come ON! After all, how can you name a book Ruthless, and expect the character to have some hesitation in killing to save her own life?