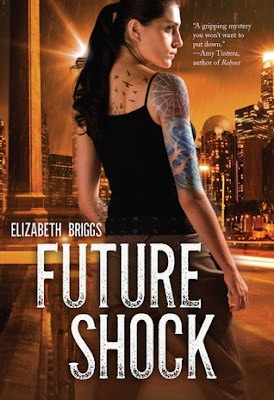 
Elena Martinez has hidden her eidetic memory all her life--or so she thinks. When powerful tech giant Aether Corporation selects her for a top-secret project, she can't say no. All she has to do is participate in a trip to the future to bring back data, and she'll be set for life.

Elena joins a team of four other teens with special skills, including Adam, a science prodigy with his own reason for being there. But when the time travelers arrive in the future, something goes wrong and they break the only rule they were given: do not look into their own fates.

Now they have twenty-four hours to get back to the present and find a way to stop a seemingly inevitable future from unfolding. With time running out and deadly secrets uncovered, Elena must use her eidetic memory, street smarts, and a growing trust in Adam to save her new friends and herself.

Future Shock, by author Elizabeth Briggs, is a young adult, science fiction, time travel story that features 17-year old Elena Martinez. Elena is a Mexican-American teenager who has been in and out of foster care since her father was sent to prison for a horrific crime. When readers first meet Elena, we get to know that she is a person who is very smart, in fact, she has a eidetic memory that perhaps causes more problems that helps.

Perhaps it is because she doesn't want to stick out any more than she does because of her skin color and her tattoos. Elena knows she needs a job, and quickly because she turns Eighteen in a few months and be released from the system to be on her own. After a surprise visit from Lynne Marshall, who works for one of the largest tech companies in the world in Aether Corporation, Elena is given the opportunity to make a difference and make more money than she can imagine.

Four others are chosen to go along with Elena: Adam O'Neill, Chris Duncan, Trent Walsh, and Zoe Chang. 3 of the 4 are outcasts and fellow foster care kids who have their own issues and problems. 1 is a genius with a bright future ahead of him. A future that sees him doing remarkable things. These kids are chosen to travel into the future TEN years to take notes on future technology and bring back anything they can get their hands on.

There were each chosen for specific skill sets. They are each given backpacks filled with supplies, and are told not to attempt to look up their future selves for fear of returning with Future Shock. Elena, because of her eidetic memories, is expected to remember everything that she sees when she comes back. The kids are expected to spend 24 hours in the future before returning to the present. In that time, only 12 minutes will have actually passed by.

There is also a huge catch however. When the kids arrive in the future, 30 years has actually passed, not ten! But, after discovering that only one of them will survive the next few days, Elena and her crew have little if any control over what happens next. Who can Elena trust, and will she be able to make it back to the present where her future is cloudy and not set?

Let's talk about the diversity in this book, shall we? First, I am A-Okay with Elena being a Latina lead character who is both intelligent, a bit high strung, but protective of others, and one who isn't afraid to back up her looks with her actions. Zoe is also unique in that she has a girlfriend, but she considers herself to be bisexual. Again, totally not complaining.

Future Shock is filled with twists and turns and a major mystery that remains clouded until the last moment. I love books that explore time travel, especially when they talk about the Grandfather Paradox, or even the Butterfly Effect of doing something to upset the space-time continuum. With the way this story wraps up, you would think the author intended for this to be a standalone novel.

However, further research, IE exploring authors web page, clearly indicates that there will be a second novel to be released September 1, 2016. Who it will feature, is beyond even my guessing. I'm not sure what a second book would cover since most of all angles and mysteries are pretty much covered by the time you turn the last page. I guess we shall see if this book does well enough for a second installment.