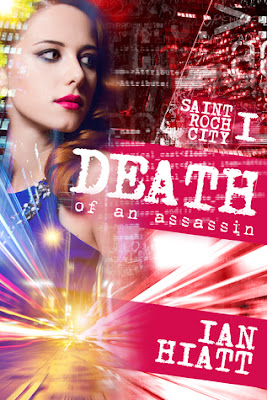 
Technically, Layla hasn't killed anyone. Ask the witnesses. It was a misstep here, a trip-and-fall there—accidents happen.
And Layla is paid very well to ensure that they do.

Her mother once traced their lineage back to ancient times. Go flip through The Odyssey. Some great-great-great grandmother is in there beckoning sailors to rocky deaths. For eons her kind has made it their business to bring hapless men to quick and messy ends. Layla can't help it that Saint Roch City has job listings for someone who can cause blameless death. You go where the work is.


When the most difficult hit of her career goes sideways, Layla finds out that what she's been told about her own history may not be so accurate. And there is no forgiveness in the business of assassinations. When you're paid to kill someone, there better be a dead body.
Either the mark's—or yours.

Death of an Assassin is the first book in debut author Ian Hiatt's Saint Roch City series. The story is narrated by 19-year old protagonist Layla, who is not only a bounty hunter, but also a Siren. In case you are wondering, yes I did just finish another series that featured a Siren. But, Layla is so much better at what she does. Layla is paid very handsomely to rid the city of thieves, dealers, enforcers, and other not so pleasant people. She is an alpha, and not just hanging onto someone else's coat tails. She's been at the top of her game for years and has never failed at an assignment.

Saint Roch City is an interesting place. It is a place where Seven human families hold all the power, while the city itself has a menagerie of paranormal creatures like Layla, her neighbor and friend Cassie and her mother Sophia who are Naja, Bruce, the Crocodile, and of course, incubus Robert Nox. What makes Layla so good at her job, is that she can change her appearance in a blink of an eye. This makes getting away easier to accomplish. Right from the start, Hiatt gives readers a glimpse into what makes Layla good at her job, and doesn't let down from there.

After accepting a 2 for 1 job for twin brothers Andrew and Thomas Donahue, Layla's choice of saving one of the brothers lives come back to haunt her big time. Layla goes from being the hunter, to the hunted. She goes from the most wanted assassin in the city, to the assassin that everyone wants to see dead. Everyone wants a piece of the bounty placed on Layla's head. But, who was behind the original contract? Who wanted the brothers out of the way, and what does Layla have to do in order to survive what happens next?

Sometimes jumping into a new author's story is like going to Las Vegas and putting all your money on the Red to win and finding out you probably should have saved some in reserve. In this case, I am happy that Hiatt offers up plenty of action, mystery, and suspense and therefore I am all in for the sequel. I totally get Layla. She's definitely more mature than said previous Siren that I previously read. She's had a good run, while at the same time, not overly excited about the fact that her mother didn't actually tell her everything that she was capable of. Especially after meeting Thomas Donahue.

Yes, folks I dare you to pick up this book and read it!