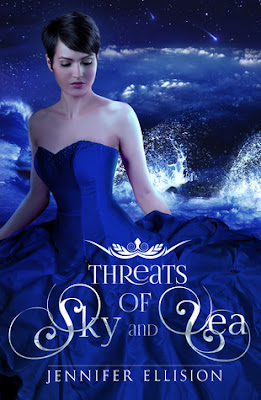 
Sixteen year-old Breena Perdit has spent her life as a barmaid, innocent to her father’s past and happily free from the Elemental gifts that would condemn her to a life in the Egrian King’s army. Until the day that three Elemental soldiers recognize her father as a traitor to the throne and Bree’s father is thrown in jail—along with the secrets from his last mission as the King’s assassin. Secrets that could help the King win a war. Secrets he refuses to share.

Desperate to escape before the King’s capricious whims prove her and her father’s downfall, Bree bargains with him: information for their lives. It’s a good trade. And she has faith she’ll get them both out of the King’s grasp with time. But that was before the discovery that she’s the weapon the King’s been waiting for in his war.Now, time is running out. To save her father’s life and understand her own, Bree must unravel the knot of her father’s past before the King takes his life– and uses her to bring a nation to its knees.

Threats of Sky and Sea is the first installment in author Jennifer Ellision's Threats of Sky and Sea trilogy. The series starts out with 16-year old Breena Rose Perdit living and working as a barmaid in Aberline with her father who runs The Bridge and Duchess tavern. Bree and her Da live the simple life keeping to themselves, knowing that Elementals are spirited away to join the Kings army. But, things change after Bree encounters King's Dogs searching for rogue elemental and they follow her home.

Bree's entire world shatters when her father's past comes home to roost. Her father isn't the person she thought he was. Instead, her father is the Duke of Secan who has been AWOL for Sixteen years after disappearing on a mission to the land known as Nereidium. He was supposed to bring back a certain treasure, but disappeared instead. Ardie, as he is called, was also one of the Kings Rider's along with Lady Katherine du Eirya. Bree and her Da are taken away to the capital of Egrian where he was once the best friend of King Langdon, and ends up in prison.

But not for long. While Ardie is sent to the dungeon for being a traitor, now Lady Breena since she is technically the heir to the Duchy of Secan, is sent into Egrian society where people scorn and treat her like a poisoned thorn. It is a place where she is expected to learn social graces, while also being experimented on by a maniac to see if she has any worthwhile value to the King. The same King who is looking for a Thrower to destroy Nereidium's defenses. The same King who has issued orders that Prince Caden and Princess Aleta marry.

Nobody could imagine, including Bree, what she holds inside her. How could it when her father kept her hidden and away from society for her entire life? How can it when people continue to try and label her unwanted and unrealistic labels?It will take allies like Prince Caden, Princess Aleta (the supposed heir to the Nereidium crown), and Adept Tregle to stay one step ahead of the King, and his loyal dog Lady Kat.
Bree's world that is filled with elementals who have an affinity for earth (Shakers), fire (Torchers), water (Throwers), and air (Riders).

Here's the things I liked about Bree. She's resourceful. She knows how to fight back, and not wilt like a flower. She's got an attitude and isn't afraid to back it up. She also has a curiously warm relationship with her father even when he has let her down in the most shameful way possible. While this story does end on a pretty stunning cliffhanger, I was able to pick up the sequel and the finale thanks to Patchwork Press. Reviews for those two books will be coming along shortly.