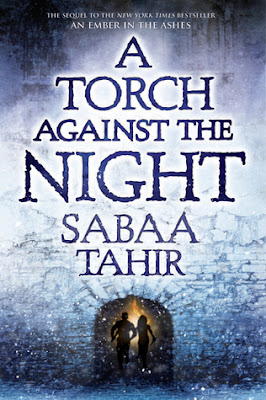 
Elias and Laia are running for their lives. After the events of the Fourth Trial, Martial soldiers hunt the two fugitives as they flee the city of Serra and undertake a perilous journey through the heart of the Empire.

Laia is determined to break into Kauf—the Empire’s most secure and dangerous prison—to save her brother, who is the key to the Scholars’ survival. And Elias is determined to help Laia succeed, even if it means giving up his last chance at freedom.


But dark forces, human and otherworldly, work against Laia and Elias. The pair must fight every step of the way to outsmart their enemies: the bloodthirsty Emperor Marcus, the merciless Commandant, the sadistic Warden of Kauf, and, most heartbreaking of all, Helene—Elias’s former friend and the Empire’s newest Blood Shrike.

Bound to Marcus’s will, Helene faces a torturous mission of her own—one that might destroy her: find the traitor Elias Veturius and the Scholar slave who helped him escape…and kill them both.

A Torch Against the Night is the second, but not final installment in author Sabaa Tahir's An Ember in the Ashes series. Apparently there will be two more books in the series coming in 2018, and 2019. Torch picks up immediately after the events of Ember, while also alternating narratives between Laia, Elias, and Helene who gets a bigger piece of the pie this time around. I am all for admitting that I enjoyed Ember, and was hoping that I could get my hands on a copy of this book. Thankfully, my local library loves me so much they ordered it and viola!

As Torch picks up, Laia and Elias are fighting their way out of Serra after Laia rescued Elias from certain death and also destroyed Blackcliff Military Academy, the bane of every Scholars existence. The same Scholars who are being slaughter en mass. Laia and Elias have come to an agreement where he will help her travel to Kauf Prison where her brother Darin has been sent to be interrogated. But, nothing is easy when you have Elias's own mother the Commandant after him, and scheming with the Nightbringer behind the new Emperor's back. Did anyone guess who the Nightbringer was before the big reveal? ::raises hand::

The relationship between Elias and Laia grows this time around. There is more than even I had hoped for. For Laia, she's grown from the first time we've seen her. Her new abilities are also very interesting as well as puzzling since we have now gone through two stories without the author explaining what Laia really is, and how she came into her abilities. I also give her a whole lot of credit for not just writing off her brother even when the chips are down, and Helene's forces are slowly luring them in. I also respect Elias for not breaking his word even when he was facing a dire situation.

Meanwhile, Helene is finding out what happens to those who have upset the balance of the Martial's Empire. Helene's story is much darker than that of Elias or Laia's and for good reason. She is the Emperor's Blood Shrike having given her oath to do whatever he tells her. She is given an order by Marcus to hunt Elias down, and bring him back to be executed publicly. Elias is a stain on the new Emperor's regime, and nothing will stand in his way of getting his revenge. Helene also has more to lose this time around especially since she still doesn't truly hate Elias, nor Laia.

"Most people are nothing but glimmers in the great darkness of time. But you, Helene Aquilla, are no swift-burning spark. You are a torch against the night-If you dare to let yourself burn."

I think the most interesting storyline in this book happens between Elias and the Soul Catcher. There is so much to say about these scenes, that I'm hoping that I don't spoil anything by blabbing about it. Don't get me wrong, the Kauf prison scenes are darker, and more vivid because of the way Elias faces his own mortality, but having a character like Soul Catcher actually was more intriguing than Helene's struggle to find and bring in Elias. Yes, I still love Helene, and I can't wait to see if she and Cook will become allies. I'm also curious as to how Elias will get out of the choice he made.