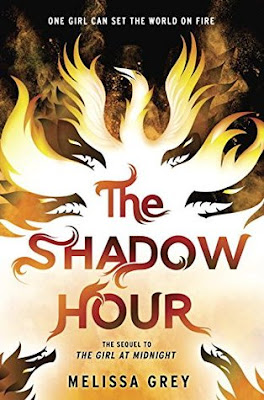 A battle has been won. But the war has only just begun.

Everything in Echo’s life changed in a blinding flash when she learned the startling truth: she is the firebird, the creature of light that is said to bring peace.


The firebird has come into the world, but it has not come alone. Every action has an equal and opposite reaction, and Echo can feel a great and terrible darkness rising in the distance. Cosmic forces threaten to tear the world apart.

Echo has already lost her home, her family, and her boyfriend. Now, as the firebird, her path is filled with even greater dangers than the ones she’s already overcome.

She knows the Dragon Prince will not fall without a fight.
Echo must decide: can she wield the power of her true nature—or will it prove too strong for her, and burn what’s left of her world to the ground?  Welcome to the shadow hour

The Shadow Hour is the second installment in author Melissa Gray's The Girl at Midnight series. This story picks up three months after the ending of The Girl at Midnight. Echo has become the prophesied Firebird, the creature of light that is supposed to bring peace. Echo is being hunted by the Avicen, Drakharin, and the Dragon Prince, aka Caius sister Tanith. She is also being hunted by a darkness called Kucedra. The Kucedra is the flip side of what Echo is. While Echo is the light, the Kucedra is the darkness.

Alongside Echo are an eclectic group of Avicen and Drakharin who have become Echo's allies and friends after the events of Strasbourg. There is Jasper, Ivy, Caius, and Dorian. While Echo continues to hear Rose in her thoughts, she also travels the world in search of answers to what she is supposed to actually do as the Firebird, while also staying one step ahead of Tanith who, shocked look, has become something of a major thorn in everyone's backside.

What's curious though is that as ugly as she is as a villain, she still is Caius blood and blood is thicker than world domination, or one hopes anyway. I would love to have rated this book a bit higher, but unfortunately there were several, yes, several love triangles that kind of sent me into skipping over pages. First, there is Echo, Caius, and of course, Rowan who she basically left behind in order to deal with the previous books events. On top of that, there is Jasper, Dorian, and a wizard named Quinn who take up a whole lot of storyline better served on something else entirely. Sorry, just don't care for triangles and never will.

In case you're wondering, yes, there is a rather blunt force cliffhanger ending that apparently will lead into the next book in the series called The Savage Dawn. This is a book of real issues that affect every single character already mentioned, plus adding even more that even though they are vital to the story, might not actually survive the bloodshed and war that has has spilled over into the mortal world. Tragedy has apparently followed the Firebird vessel for a very long time. Will the same thing happen to Echo, or will she find the courage and strength to stand before the darkness before Tanith brings the world to an end?