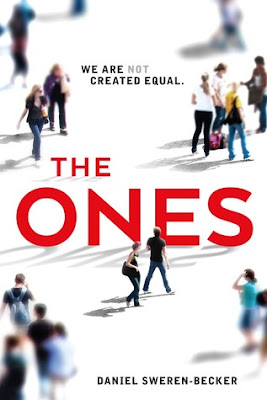 Cody has always been proud of being a One. She and her boyfriend James were two of the lucky babies from the 1% of the U.S. population that were randomly selected to benefit from genetic engineering. Now, she and the rest of The Ones are excelling. They are healthy, beautiful, and talented. They aren't otherworldly, just perfect. And to some, that's not fair. The Equality Movement, capitalizing on the growing fear and jealousy, gains political traction and actually outlaws their existence. Society shows its darker side as The Ones are marginalized. The line between right and wrong blurs in the face of injustice and Cody becomes closer to a group of radical Ones intent on fighting back. James begins to fear just how far she is willing to go for the cause.

The Ones is the first installment in debut novelist Daniel Sweren-Beckers' new series. 16-year old Cody Bell, and her boyfriend 17-year old James Livingston are considered to be modern day miracles. They are among the first group babies to have been born perfect thanks to Genetic Engineering. Sanctioned by the National Institute of Health, one percent of the population, or 1/100 newborn babies were chosen to be genetically modified via lottery. In every way, Cody, James, and the One percenters are healthy, talented, beautiful, and have tremendous advantages over the so called normal population.

Because of this fact alone, there are those who consider it unfair to the rest of the population. The Equality Movement is so hateful and spiteful towards the one percenters who were given no voice in how they were born, that their case ends up in the Supreme Court which hands down a stunning decision to make genetic engineering illegal.
The decision sends shock waves throughout the rest of the country and sets off a series of events that will lead to unimaginable heart breaking choices being made by Cody and James in order to fight back against bigotry, racism, and intentional incarceration of innocent people.

For Cody, she finds a group called The New Weatherman who are at their very core, terrorists just like the original group from the 1960's. They are not willing to go quite into the night without making some major noise first. You can argue with me over semantics, but when you pick up arms and make threats against others, you are in fact a terrorist. For Cody, this is a personal choice after learning a shocking secret that upsets everything that she's learned. Even though this book alternates narratives, Cody is the most appealing in my opinion. Her world has been laid at the foundation of one thing, only to be shattered by the hopes of a mother looking for the best for her only child.

One can definitely say that Sweren-Becker tries hard to be the voice of reason, but lays heavily into social justice themes of discrimination based on one's birth, rather than one's skin color, religion, or sexual orientation. This is a hard road to travel and yet Sweren-Becker did a good job in keeping things moving quickly, and in a fashion that leaves questions about what would happen in this country if genetic engineering was found to be illegal. After all, the rich in this country have a huge monetary benefit at their disposal and can pick and choose what characteristics their babies are born with. Just ask Kim Kardashian.

One last point. Sweren-Becker dives into a hard topic. That topic is being forced into camps just because one is different, or are now enemies of the state. In the US, we've gone down this road under two different Democratic Presidents. Woodrow Wilson, and Franklin Delano Roosevelt. German, Japanese, and Italian Americans, like my descendants, found themselves in these camps even though they were innocent. So much for the 4th Amendment. Wilson even signed the Sedition Act which made it a crime to criticize the government and took away civil liberties of anyone who criticized his administration. Can you imagine all the people who would be sent to camps in today's society?