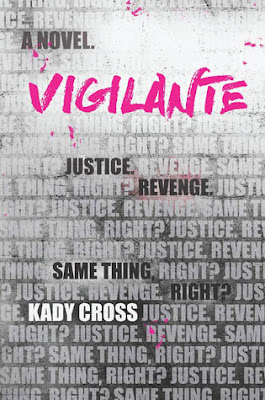 
A brutally honest, uncompromising story about a teen girl who decides to take matters into her own hands.

It's senior year, and Hadley and her best friend, Magda, should be starting the year together. Instead, Magda is dead and Hadley is alone. Raped at a party the year before and humiliated, Magda was driven to take her own life and Hadley is forced to see her friend's attackers in the classroom every day. Devastated, enraged and needing an outlet for her grief, Hadley decides to get a little justice of her own.


Donning a pink ski mask and fueled by anger, Hadley goes after each of the guys one by one, planning to strip them of their dignity and social status the way they did to Magda. As the legend of the pink-masked Vigilante begins to take on a life of its own, Hadley's revenge takes a turn for the dangerous. Could her need for vengeance lead her down a path she can't turn back from?

Vigilante, by Steampunk Chronicles author Kady Cross, is a standalone contemporary thriller that centers on a girls desire for revenge. Hadley White is a senior at Carter High School. She's facing the school year alone after her best friend Magda chose to take her own life. Magda was raped and had pictures of her posted to the internet. If that weren't enough, everyone from parents, to teachers, to students, blamed Magda for allowing herself to be in that position in the first place. It literally destroyed her heart and soul.

No one stood up for Magda in her time of need except for her brother Gabriel, and Hadley. Even Hadley let Magda down at the most inopportune time. While Hadley & Gabriel were supportive mostly, when you make a reference, or commentary that could be construed as inflammatory, then you need to understand how that feels to a person who has just had her world shattered beyond repair. In Magda's case, yes I did feel for her. I would never take such as drastic step, but I will ever slam someone over the choices they make. One could say that Hadley's desire for revenge is due in large part because the system failed Magda spectacularly.

It also comes from the idea that she could have done more to help Magda. This guilt and grief sends Hadley into a dark place where the only way out is to find a way to make those boys pay for what they did. So, when opportunity knocks on the door, Hadley, who is trained in martial arts, makes the choice to pay each of the boys back for what they did to Magda. Hadley becomes the Pink Vigilante which leads her down the rabbit hole into even more dangerous situations. Her decision causes quite the stir, and a tidal wave of support from other girls and women. But, not everyone loves a Vigilante.

Hadley finds that she has the support of some surprising girls from her school, and her Do Jo where she and others train to fight back against potential attacks and rapists. For Hadley to take on the persona of a vigilante, a choice has to be made to put your own safety behind everything else. You have to ignore the police, and your parents, and those who are not as understanding as to the reasoning behind putting yourself that close to evil beings who care not who they hurt, as long as they are having fun. You have to also understand that if you get caught, you will probably go to prison quicker than you can imagine.

There is a factual element that says if you are rich, and with means, or have the ear of major players in law enforcement, then you can pretty much get away with anything. That isn't the case of Detective Diane Davies who stands in the forefront of finding justice for Magda. Nor do I believe that all judges, lawyers, or juries in real life are absolutely corrupt. I don't think that all cops are bad either. As a rape survivor of 20 years now, I had no desire to become Hadley who chooses to become a vigilante.

I did not find it necessary to blame others for what happened to me. I didn't blame the cops for not having enough officers on the streets at the time of my rape. I didn't blame society who is obsessed with blaming men for every single one of their issues. I blamed the rapists. Period. The RAPIST chose to break the law. The RAPIST chose to take something from me I can never get back. One of the preachier aspects of this story is when the narrator states that "the best way to prevent sexual assault or rape is to not assault or rape anyone." Yes, that is true. However, let's stop saying that All men are potential rapists. They're not. Let's discourage authors and movie producers from using rape scenes on TV, Movies, and in young adult novels where kids may be swayed into doing things like raping young girls, and yes, even boys.

Vigilante isn't necessarily for everyone. I would rate this book as PG for its dark content, its focus on rape. There are scenes in the book that may be too violent for younger readers. One of the aspects of this story I did like, was when Hadley realizes that while Magda is gone, she isn't alone. First, there is Zoe who breaks through Hadley's shield, then there is Detective Davies who could have stopped Hadley. Davies really is a wonderful character. As for Hadley's mom, I had some issues with her, but that ended up being resolved in a heart warming manner.