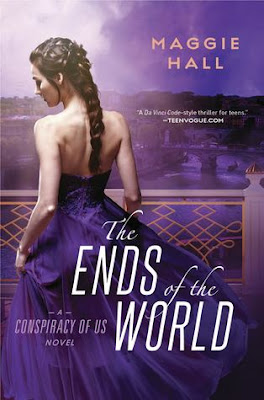 
The thrilling conclusion to the series, a “Da Vinci Code-style thriller for teens.”

Power balances on a knife’s edge. Destiny is uncertain. And love is the most terrifying thing of all.


The Circle of Twelve is not who Avery though they were. Neither is Avery.

Her mother is dead. Betrayal and attraction and history have tangled the strings that bind her, Jack, and Stellan. And now, Avery and her friends must put aside their own problems and focus on putting a stop to the most dangerous conspiracy of all…


From London to Russia to Egypt, from the chill of underground crypts to the flash of paparazzi cameras, Avery West will finally have to confront whether her fate means salvation—or destruction.

The End of the World is the third and final installment in author Maggie Hall's The Conspiracy of Us trilogy. I have seen this series being called The DaVinci Code meets Gossip Girl. Since I never once watched Gossip Girl, so I shall let other's explain that comparison to me. I do, however, agree that there are a whole lot of similarity to this series and The DaVinci Code. That being sad, 17-year old Avery West's life has been a whirlwind journey from the beginning of this series, to the strange, and twisted ending that reveals a whole lot of what Avery, Stellan, Jack, and Elodie have been facing.

As the story opens, Avery is mourning the loss of her mother. A mother who held a whole lot of secrets from Avery that may or may not have saved her daughter so many emotional moments that she's experienced from the first book onward. She is the girl with the purple eyes. The supposed heir to a powerful group known as the Circe. The one who has already been caught up in a love triangle between Jack Bishop, the boy she's known forever, and Stellan Korolev, the boy who is apparently a descendant of Alexander the Great, and therefore, the boy who is supposed to unite the bloodlines with Avery as the 13th family.

As with it's predecessors, The Ends of the World once again travels all around the globe (Jerusalem, Egypt, France, Rome) in search of answers and in hopes that someone actually survives to see the future they have fought so hard for. Can they finally find the answers to Alexander The Great's mystery, or will a powerful family bring it all crashing down on their heads? In my previous review of Map of Fates, I called the book a dark story because of the number of characters who are killed off. The author once again leaves nothing to chance, and I mean nothing. If you are expecting answers before the ending, hang on to yourself because you are in for a very bumpy and exciting ride.

In closing, I will absolutely recommend this series. Maggie Hill has such a wonderful imagination, and her characters are living in a world that 99% of the world will never see. There has been danger and deception at every turn. However, at no point did I believe that Avery was this rich young woman who was given everything she ever imagined by Paris Hilton. That is so far from the truth. Her relationship with Jack & Stellan was sorted out in a way that makes sense. The addition of Stellan's younger sister Anya may have gained him a bit of an advantage truth be told.