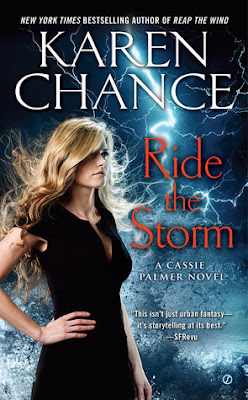 Next in the New York Times bestselling urban fantasy series featuring Cassie Palmer, whose ability to see the future and talk to ghosts gets her mixed up with vampires, fae, and non-stop action.

Ever since being stuck with the job of pythia, the chief seer of the supernatural world, Cassie Palmer has been playing catch up. Catch up on the lifetime’s worth of training she missed being raised by a psychotic vampire instead of at the fabled pythian court. Catch up on the powerful, and sometimes seductive, forces trying to mold her to their will. It’s been a trial by fire that has left her more than a little burned.


But now she realizes that all that was just the warm up for the real race. Ancient powers that once terrorized the world are trying to return, and Cassie is the only one who can stop them…

Ride the Storm is the Eight installment in author Karen Chance's Cassandra Palmer series. The novel picks up right after the last one, Reap the Wind, left off. Readers have been eagerly waiting for several years to find out what happens to Cassie, her lover, the Master Vampire Mircea, and her friend (and possibly more), mage John Pritkin. The author has been teasing and tantalizing readers with bits and pieces of information while we yearn to find out if Cassie will ever learn about the full extent of her powers while chasing Pritkin's soul back to sixth century Wales.

Cassie, as the supernatural world's chief seer, has been expected to learn about a thousand years worth of supernatural politics quickly. But, when you are thrust into the job without any training, things quickly spiral to places where the unexpected soon happens. One asset that Cassie does have, is her necromancer ability to connect with ghosts. An ability she received from her own father. There are quite a lot of ghosts in this story. This asset has helped her more than a few times out of jams that didn't look so good for our heroine.

Even though Cassie was brought up in a Tony Soprano like vampire home. Even though she was bound to Mircea by happenstance, and has vampire bodyguards. She has never felt as though she was compelled to do their bidding over the Silver Council, or her own Pythian Court. Cassie's main goal has been to save Pritkin, who is her mentor & bodyguard & hopefully more. His soul has been traveling through time, and every time she and Rosier gets close, they are returned to the present by someone who thinks she's intentionally trying to screw with the time line. Cassie has more than enough on her plate with traveling back in time hoping to save Pritkin.

She also has to chase down & stop a rogues named Johanna who is trying to usurp her powers and help Ares break through a previously unbreakable door. A door which was put in place by Cassie's own mother. A mother who was considered to be one of the more interesting Goddesses of mythology. And finally, to prove that she is able to be her own person capable of making her own choices and not allowing the other factions of the supernatural world to control her. Ride the Storm covers a whole lot of ground & issues this time around. We get more back stories from Pritkin, Mircea, and even Rosier and his connection to Arthur.

One could say that Rosier is in the story more than anyone else, except Cassie, of course. But, no worries, there are some surprises as well. A whole lot of lingering and frustrating storylines are resolved in ways that are expected, and unexpected. The author isn't afraid of writing full throttle action scenes from the first chapter, to the last chapter, and the final battle in this story is pure badassery. We know that Chance isn't afraid of putting Cassie into life or death situations where she has to think on her feet, and not just run away and hide.

I have been eager to learn the truth about Cassie's parents and what really happened to them. We've been teased and taunted, and finally Chance gives us a chance to understand who they really were, and why they did the things they did in order to save Cassie. Cassie's growth as a character has finally come to bear. She is able to stand on her own two feet and push back against those who have not exactly been supportive at times. It's nice to actually see a bit of maturity take place with Cassie even though she deals with so much that one could say it's time for a nice vacation.

Even though it has been several years, (2015) since the previous installment was released, I have to say that the wait is worth the trouble. There is very little down time in this story. Cassie is involved in numerous action scenes where she must pull a rabbit out of her hat in order to survive. Cassie has been through the ringer, and it's fair to say that if the author chooses to end her series after this book, I would be sad yes, but I would also be grateful that Cassie no longer has to deal with so many deadly challenges.