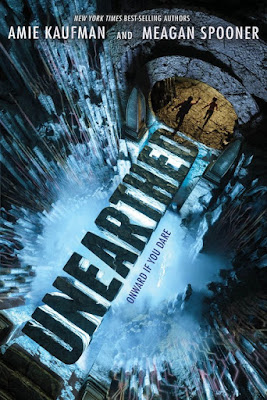 
When Earth intercepts a message from a long-extinct alien race, it seems like the solution humanity has been waiting for. The Undying's advanced technology has the potential to undo environmental damage and turn lives around, and their message leads to the planet Gaia, a treasure trove waiting to be explored.

For Jules Addison and his fellow scholars, the discovery of an ancient alien culture offers unprecedented opportunity for study... as long as scavengers like Amelia Radcliffe don't loot everything first. Despite their opposing reasons for smuggling themselves onto the alien planet's surface, they're both desperate to uncover the riches hidden in the Undying temples. Beset by rival scavenger gangs, Jules and Mia form a fragile alliance... but both are keeping secrets that make trust nearly impossible.


As they race to decode the ancient messages, Jules and Mia must navigate the traps and trials within the Undying temples and stay one step ahead of the scavvers on their heels. They came to Gaia certain that they had far more to fear from their fellow humans than the ancient beings whose mysteries they're trying to unravel. But the more they learn about the Undying, the more Jules and Mia start to feel like their presence in the temple is part of a grand design--one that could spell the end of the human race...

Unearthed is the first installment in co-authors Amie Kaufman & Meagan Spooner's Unearthed duology. Unearthed is a story that is filled with non-stop action, intrigue, surprises, and yes, romance. Set entirely on a far off planet by the name of Gaia, the authors use dual alternating narratives to tell their story. 16-year old Amelia Radcliffe is a scavenger & thief who took a job on Gaia to find something valuable enough to pay off her sister's debts.

18-year old Jules Addison is the son of a disgraced scientist who was the first person on Earth to unlock the message sent by the people known as the Undying. Jules wants his father's reputation redeemed and in order to do so, he must combine talents with a scavvy in order to not only survive, but to unlock the true meaning behind the secretive messages. Now the two have been tossed together in a setting not unlike Laura Croft Tomb Raiders, or Indiana Jones in a race against time and enemies who will do anything to bring back fortune and glory.

Amelia and Jules couldn't be any different. They come from different backgrounds. She's from Chicago, he's from England. Amelia is the snarky badass, while Jules has never went a day without being able to do what he wants. She lived off scraps and stole in order to save her sister from a group that holds her hostage, while he was able to actually able to graduate from school and gain knowledge in order to be one of the most valuable persons on any planet.

This story is filled with puzzle pieces, villainous humans who are out for their own prizes, a temple filled with so much danger that it will take all of Jules and Amelia's skills to survive. PLUS, a very breath taking cliffhanger ending that has me pensive about what will happen next.

Dislikes? Ok, fine, I struggled with the necessity behind using so much of the book to write a romance that really could have been edited out of the book. Sometimes I believe authors use romances as a crutch in order to fill story holes they created.

Lots of time was spent with Mia and Jules attempting to unlock twisted through puzzle pieces left behind by a race that supposedly destroyed themselves long ago. Along the way, I got the sudden urge to sprint to the finish because I was already guessing something wasn't all that was cracked up to be. Kind of reminded me of the Lara Croft games where you have to search and search and search for a way out of your current scene before bad things happened.

Waiting until 2019 for the final installment to come out. Why do you authors torture us like this? Write faster!