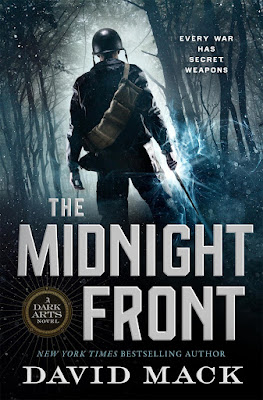 
It's World War II and Winston Churchill has enlisted a secret front of wizards to combat the dark forces aiding the Nazis in their bid for world conquest.

Cade Martin is the key. But Cade isn't the Chosen One. The Chosen One was murdered by the sorcerous fire of Axis operatives before he could come into his power. In the war to save the world from plunging into darkness, Cade Martin is plan B.

Cade's teammates in the Midnight Front—magic users all—don't know what to make of him. Some don't trust him. But the stakes are higher than at any previous moment in human history, and the Midnight Front has no choice but to find a way to work together to somehow defeat Adolf Hitler's sorcerers before it's too late.

The Midnight Front is a thrilling, emotionally charged, action–packed tour–de–force.

The Midnight Front is the first installment in author David Mack's Dark Arts series. Like the series name, this story is very dark. It takes place during World War II (1939 thru 1945) when the entire world was at war or holding its breath to see who would be victorious. The story encapsulates the Nazi death camps, the Allied landing at Normandy, the German invasion of Russia, the Allied bombing of Dresden, as well as the American bombings of Japan. But, it also includes a war within a war that might change the course of the world.

The story actually has a slew of narrators from both sides of the conflict. The good guys are Cade, Stefan, Anja, Niko, and Adair Macrae. The bad guys are Segmar, Briet, and Kein Engar who pretty much control not only Hitler, but the Third Reich as well. While the synopsis mostly focuses on Cade's side of the story due to the fact that he is the only American among the group of heroes and villains, don't look away from the other characters. Each of them bring valuable back stories with them. Each of them are from different countries, different backgrounds, and have different reasons for partaking in a war that could end the worlds dependency on science.

Each of them is also at the highest level called Karcist, which mean they can summon and hold upwards of 11 demon servants at a time. This really is a character driven story without the necessity of any world building. The author puts you in the heads of Stefan, who fights his way through Poland looking for his lost lover and a valuable Codex, to Niko's quest in France to not only find his sister, but to destroy covens filled with dabblers that answer to the enemy, to Anya's heroic fight against the German army in her native Russia even though they don't like her kind all that much.

Cade is understandably the main character because of who he is and what he is capable of being. From the first moment we meet Cade, there is something that just rings bells that you better pay attention or you will miss something the author has thrown in. Cade's journey is filled with just as many ups as there is downs. From the horror of losing his parents, to training harder than you can imagine, to learning how to summon and control demonic servants, to fighting across Europe in order to help defeat the villainous mastermind Kein and his accolades who are just as dangerous as he is.

After an ending that left all sorts of questions as to what is going to happen next, I do look forward to seeing where Mack takes Cade and his characters.