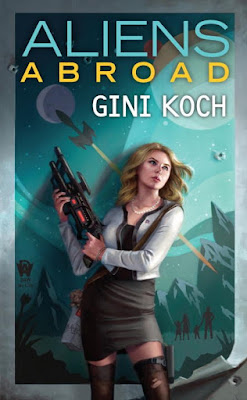 With human populations growing and alien populations adding in, the Earth is becoming too overcrowded to sustain itself, and the solar system is already filling up with aliens. With the technology from the Alpha Centauri and Vatasusan systems having been given to Earth, it’s time to explore new planets and see if any uninhabiteds can be claimed. The President and First Lady, aka Jeff and Kitty Katt-Martini, aren’t supposed to be on this mission, but what looks like a snafu during a political photo op on the newly christened Distant Voyager spaceship turns out to be a call for help from a planet that might be Earth’s salvation…or its destruction. Now Kitty & company must figure out how to safely as well as boldly go where no one has gone before and this time, the stakes are higher than anyone could have imagined.

Aliens Abroad is the sixteenth novel in Gini Koch’s rollicking Alien science fiction action series featuring Katherine "Kitty" Katt-Martini as the heroine who kicks butts, takes names, and rocks out to various cuts of music as she is doing so. As the story opens, Kitty is contacted by an unknown alien who asks for her help. This is the first time the author has introduced us to the so called Dreamscape, which no, has nothing to do with the movie from 1984.

Shortly thereafter, on the day of the launch of the new starship called Distant Voyager, Kitty, her family, a slew of random others, including most of Jeff's cabinet, are sent on a mission of utmost importance. Apparently, the fate of the galaxy is in jeopardy, and Kitty, as the Warrior Queen, is once again called to stand up and protect others as she has done this entire series. Kitty brings her usual stock of sarcasm and snark to the story along with an intelligence that is often overlooked by those she has spent almost decade with fighting aliens and saving the universe.

This story is one with three different missions that Kitty and her crew must solve before moving on to the next stop. At each stop they are sent on, billions will die unless they figure out a way to stop the impending galactic apocalypse from happening. This is brilliantly thought out story, which impresses me since this is the 16th installment in the series and things still haven't gotten stale for me. In this story, a different super-consciousness guides the crew of the Distant Voyager to places that really need Kitty's unique ways of solving difficult issues.

I love the relationships that Kitty has with each of these characters, especially Lilith. They all adore Kitty because Kitty has shown that she can change the minds of even the most cynical person to her side. I am curious as one who has read this series from the beginning. I don't honestly remember if the author has ever left such a stunning ending to her story before. I will definitely have to go back and re-read my reviews to see if this has happened. This stunning ending really leaves me eager to pick up the next book in the series.

One of the more interesting selling points I read recently about this series said, "this breakneck series includes plenty of sex and last-ditch efforts to save the world—imagine Men in Black and True Lies having a girls’ night out in Area 51."