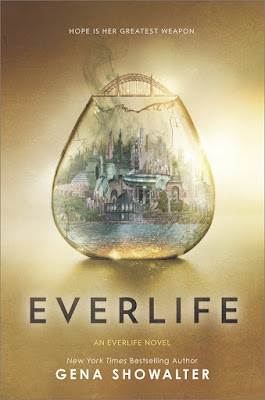 
In Book 3 of the New York Times bestselling author Gena Showalter's Everlife novels, war is heating up even as numbers-obsessed Tenley "Ten" Lockwood gives her all to stop the conflict and rebuild the bridge between the two realms of the afterworld. Action, betrayal and forbidden romance abound in this exciting conclusion to the trilogy.

Ten Lockwood lost the last battle, but the war between Troika and Myriad, the two realms of the Everlife, is far from over. Ten's secret bond with rival realm Laborer Killian Flynn may give her the strength to prevail...or may be the key to all of their undoing, as rulers make their final plays and trust becomes an afterthought. Ten has been given the crucial choice of which soul to bring back from Second-death to fight for Troika, but will she choose the person she wants most beside her, or the one the realm needs to triumph once and for all?

Nothing is certain--not Killian's love for her, not her own faith in herself...not even whether she can trust her realm-mates to have her back when the darkness of Myriad rises to come for them all. Don't miss the exhilarating and breathtaking conclusion as Ten evolves from cynic, to leader, to a true visionary able to inspire the world and help everyone build a new way of life forevermore.

"When a storm comes, the lie will crumble and fall, and only the truth will remain."

Everlife is the third installment in author Gena Showalter's Everlife trilogy. As the story opens, things haven't exactly gone well for Tenley (Ten) Lockwood. Upon her Firstlife ending, Ten chose Troika over Myriad which wasn't necessarily a bad thing. But, this wasn't the after life she was hoping for. This after life features the realms of Myriad and Troika at war and nobody is willing to give an inch. Not even when a major virus could bring down Troika and give Myriad control over both realms.

"Firstlife was a dress rehearsal. Now the curtain is up. and we're performing in front of a live studio audience. Every word, action and decision comes with a consequence. There is no second chances to right our wrongs. No do-overs."

Ten, who is one of Troka's Conduits (responsible for lighting Troika), is tasked with selecting which of Troika's fallen is to leave the Rest, the place where Troikans go upon their Second death. All indications are that Ten will choose one of the fallen Generals Troika needs so badly to help stabilize their realm, and keep Myriad from winning. Even though Troika is outnumbered and outgunned, they have Ten and her desire for peace among the realms. That is why Ten's choice isn't, nor should be shocking to anyone who has read this series from the beginning.

Now, Ten, along with her boyfriend Killian Flynn, who just happens to be known as the butcher from Myriad, must unite as one, and attempt to bring the two realms together before the deadly Penumbra virus is released and fundamentally
changes the Afterlife forever. Ten and Killian's plan doesn't go exactly as planned after they unite and he loses his memory of what they planned on doing and their bond. What's worse, if something happens to one, it happens to the other as well. Killian is Tenley's weakness and their enemies know it very well.

This series stuck to the idea that Tenley is light, while Killian is dark. But, binding the two together, will bring dark to Ten's emotions, and light to Killian's thinking. If you can unite the two together with love, you can defeat any sort of darkness that stands in the way. The most curious aspect of this story is that part of it takes place in Troika, part of it takes place in Myriad, and the most twisted part takes place in Many Ends. I also loved the addition of the guardians, which means Ten ends up with Biscuit as her guardian. Biscuit and his fellow guardians are just plain awesome!

One of the stables of Tenley's life has always been those who she calls friends. People like Archer, Clay, Reed, Raanan, Clementine, Sloan along with her brother Jeremy who she can telepathically speak to even though he is a baby. Ten is a strong character who has some upsetting moments at times, but overall, she stands and delivers and rises to the creme of the top when the chips are down, and a heroine is needed to do what is right for both realms. This is a story of love, loyalty, trust, and attempting to save as many people as you can since not everyone will be happy with peace between the realms. Killian and Ten endure a whole lot and are tested to the limits of their abilities. They will face pain and suffering, betrayal and happy reunions, and a bond that bends but doesn't break.

"I'm a Troikan Conduit. He's a Myriadian Laborer. We are lifeblood-born enemies, and yet he is the love of my Everlife."