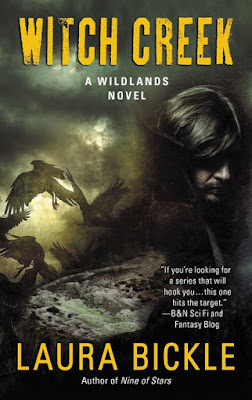 
In the backcountry of Yellowstone, evil moves below the surface...

As the daughter of an alchemist, Petra Dee has battled supernatural horrors and experienced astonishing wonders. But there’s no magic on earth that can defeat her recent cancer diagnosis, or help find her missing husband, Gabriel. Still, she would bet all her remaining days that the answer to his disappearance lies in the dark subterranean world beneath the Rutherford Ranch on the outskirts of Temperance, Wyoming.


Gabe is being held prisoner by the sheriff and heir to the ranch, Owen Rutherford. Owen is determined to harness the power of the Tree of Life—and he needs Gabe to reveal its magic. Secretly, the sheriff has also made a pact to free a creature of the underground, a flesh-devouring mermaid. Muirenn has vowed to exact vengeance on Gabe, who helped imprison her, but first...she’s hungry. Once freed, she will swim into Yellowstone—to feed.

With her coyote sidekick Sig, Petra must descend into the underworld to rescue Gabe before it’s too late...for both of them.

Witch Creek is the fourth installment in author Laura Bickle's Wildlands series. This book takes place 9 months after Petra Dee arrived in Temperance, Wyoming looking for clues to her father's disappearance. Her "main" job is actually that of a geologist, but she's been interrupted by the strangeness and the people who call Temperance home. A home that was pretty much created by Lascaris by using alchemy.

Petra's entire body is a map to the troubles she has faced since arriving in Temperance, and it is only the beginning of what is to come. Petra, as you hopefully know from reading the previous 3 installments, has been through a whole lot in the 9 months that she has been living in Temperance. One could say that her current health crisis is the biggest obstacle of her life, and one that nobody would wish on anyone, let alone someone they don't like.

But, Petra isn't going to allow her illness to dictate how she lives her life, even if that life is to be shortened. She needs to put one foot in front of the other and kicks herself in gear in order to discover the mystery behind Gabe's disappearance.
Gabe, the former Hanged man who is no longer immortal, spends a whole lot of time with Sheriff Owen Rutherford, and hardly any time with Petra.

This story not only digs into Gabe's past life and how he ended up in Temperance, but we also get more of an introduction to Lev, a bartender who has been, at best, a tertiary character who is now a major player. I will say that Lev's storyline really intrigued me because of who he is. It's fair to say that you will have to read the book for further explanations. Lev's story, the good and the sad, will intermingle with Petra's for a moment in time, but after that, who is to say whether or not they will remain allies or not.

But, the most intriguing character is the character the author calls the Mermaid. Since revealing the actual identity of the Mermaid leads to all sorts of spoilers, we will walk right over this. The most interesting part of the story itself, is that each of the main characters faces their own mortality. Petra with her illness. Gabe by being kidnapped and not allowed freedom from Owen while also staring at death from the mermaid who he has a history with. Whether or not they all survive is entirely based on other characters, and factors that leaves the story hanging off a cliff wondering what is going to happen next.